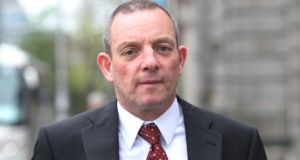 Former Fine Gael TD Jerry Buttimer has been elected to the Seanad and two other ex-TDs who lost their Dáil seats are also expected to win in the Upper House.

Cavan-Monaghan former TD Joe O’Reilly of Fine Gael and Labour Minister of State Ged Nash are likely to be returned, but former Fianna Fáil TD Colm Keaveney was unsuccessful in his attempt to win a Seanad seat on the Labour panel.

Mr Buttimer, who lost his Cork North-Central seat, said he was “thrilled and delighted and privileged to be elected” after a long and gruelling Dáil and Seanad campaign.

Mr Buttimer said it was “great to be back at national political level again. “It will be a different parliamentary party and political landscape this time but I will make sure our voice is heard,” the new Fine Gael Senator said.

His party colleague Councillor Neale Richmond was expected to be elected when he had a surge in transfers from Joe Neville, nephew of retired Fine Gael TD Dan Neville, who was excluded on the 11th count and that brought him ahead of party colleague and rival Terry Brennan.

Cllr Richmond who lost out to former Fine Gael TD and minister Alan Shatter in the Dublin South Dáil election selection convention, is expected to be confirmed as a Senator when counting resumes later on Wednesday morning. It was suspended at 12.30 am.

A “dogfight” will ensue today when counting begins on what has been described as the most difficult Seanad election vocational panel.

Thirty four candidates are in the race on the Industrial and Commercial panel with nine seats to be decided. It has been described as the easiest panel on which to get a nomination, because it has the most outside nominating bodies, or organisations linked to the industrial and commercial world but attracts the most candidates, 34 this time.

Fine Gael will have a difficulty here as the party has five outgoing Senators but can only expect to win three at most.

Meanwhile outgoing Independent Senator Gerard Craughwell has retained his seat on the Labour vocational panel, bringing to two the number of elected Independents.

As counting continued late on Tuesday night the current state of the parties was five seats each to Fine Gael, Fianna Fáil and Sinn Féin, with two Independents, one Green Party Senator and one Labour Senators. There are 43 seats in all on the vocational panels.

In an upset for Fine Gael , leader of the previous Seanad Maurice Cummins, who enjoyed cross-party respect and popularity in the Upper House was expected to lose his seat.

Green Party candidate Grace O’Sullivan is the first Green elected to the Seanad, while all previous Green Senators were Taoiseach’s nominees.

Sinn Féin topped the poll for the third time in the Seanad vocational panel election after the election on the first count of South Dublin Councillor Maire Devine on the Labour panel.

She was followed on the second count by party colleague Paul Gavan from Limerick.

The party has seven candidates on the five panels and expects to return seven Senators in an extremely disciplined vote management strategy organised by director of elections and party whip Aengus Ó Snodaigh.

Fianna Fáil’s vote management resulted in the loss of a seat on the Agricultural panel despite having an extra 120 votes this time compared to 2011. Fianna Fáil’s Denis O’Donovan and Brian Ó Domhnaill retained their seats and a new Senator, Councillor Paul Daly also won a seat. But outgoing Co Leitrim Senator and broadcaster Paschal Mooney lost his seat.

Fine Gael kept its three seats but only outgoing Cathaoirleach and Castlebar Senator Paddy Burke retained his seat. Michael Comiskey from Co Leitrim and Co Kilkenny outgoing Senator Pat O’Neill failed to retain their seats. Councillors Maria Byrne and Tim Lombard, both from Co Cork were elected in their stead.

After her poll topping election to the Labour panel Senator Devine thanked her Sinn Féin colleagues for their support and said she would be a “voice in the Oireachtas for nurses and a strong advocate for the mental health services.” “The recent pillaging of the mental health budget by the acting government demonstrates the need for a strong opposition to highlight the dangers such contempt for the health service can pose,” she said.