Focus to turn to Phil Hogan’s knowledge of contracts 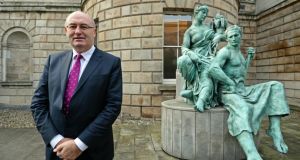 The account given by senior executives of Irish Water today of how €50 million was spent on consultants in its first year of operation may prompt questions as to how much knowledge Minister for the Environment Phil Hogan had about the expenditure.

The company will appear before the Oireachtas Committee on the Environment this afternoon to outline how, and why, half of its €100 million spend over the past year went to some of the biggest accountancy and IT firms in the State, including Ernst and Young, IBM, Oracle and Accenture.

In briefings in advance of the meeting, Irish Water or Uisce Éireann has said it will give a full timeline and details of official approval of the contracts and which companies benefitted.

It has also indicated that it will disclose departmental approval of the expenditure.

If the Department gave approval for each of the contracts awarded to consultants, the focus will shift somewhat to Mr Hogan and the extent of his knowledge on the reliance of the new utility on consultants.

The chair of the committee, Labour TD Michael McCarthy confirmed this morning that Mr Hogan will appear before the committee at a later sitting.

“Absolutely we will look at it. It is in all of our interests that there is optimum accountability and transparency,” he told RTÉ’s Morning Ireland.

The disclosures over expenditure on consultants will now be the subject of separate examinations by two Oireachtas committees. The Public Accounts Committee will also question senior management at Irish Water at its meeting on Thursday.

Dropping a heavy hint, there was political friction on this issue, Mr McCarthy commented on the intervention of the PAC in the issue by describing it as “ambulance chasing in this regard”.

It comes as Government sources signalled that Uisce Éireann will be made fully amenable to the Freedom of Information Act from its establishment and not from when the company becomes operational as has been the intention.

Another issue that will be raised by committee members this afternoon is the recruitment policies of the company. While chief executive John Tierney has insisted all senior appointments were made in an open process, there has been persistent criticism that they have been too ‘insiderish’.

Over half of the nine senior management positions are from either local authorities or from the Department of Environment, while two are former executives with the consultancy firm RPS, which worked closely with Dublin City Council on the Poolbeg incinerator project at a time when Mr Tierney was city manager. He has pointed out that neither were employees of RPS when recruited by Irish Water.