Flanagan to brief Cabinet on dissident and gang threats 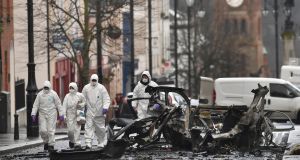 Minister for Justice Charlie Flanagan will today ask the Cabinet to approve the annual extension of special policing and justice powers, citing the threat from dissident republicans and the ongoing feuds between organised crime gangs.

The Special Powers Acts, first introduced before the second World War and updated after the Omagh bombing, are intended to combat threats to the security of the State from armed subversive groups. They include a range of powers for the Garda as well as providing the legal basis for the non-jury Special Criminal Court.

Criminal justice legislation introduced in 2009 extended many of the special powers to cover organised crime gangs. Mr Flanagan will tell ministers that there remains a real and persistent threat from terrorist activity, particularly from dissident republicans.

He is expected to highlight the killing of journalist Lyra McKee in Derry last month, as well as the posting of incendiary devices from Ireland to Britain in March.

Mr Flanagan will tell ministers that the threat level in Northern Ireland is regarded by the security forces there as “severe” and that dissident republicans remain the greatest threat to the security of the State. He is also likely to brief colleagues on the threat posed by organised crime gangs, highlighted by the ongoing feuds between rival groups in Dublin and Drogheda. The gangs are responsible for murder, smuggling and supplying drugs, firearms and explosives, as well as planning and carrying out kidnappings and robberies, he will say.

Due to the wide powers granted to law enforcement under the Acts, they have to be renewed annually by the Oireachtas.

Mr Flanagan will present resolutions to the Dáil in the coming weeks if the Cabinet agrees to extend the laws, which is usually no more than a formality.

The provisions of the Acts will cease to be in operation if resolutions are not passed by the Dáil and Seanad before June 30th.