FG reaches for beef and broadband as rural support slides 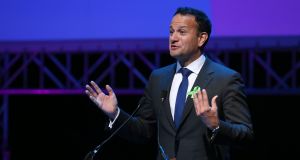 Taoiseach Leo Varadkar and senior Ministers have for months been talking privately about the decline in support for Fine Gael in rural Ireland. Photograph: Laura Hutton

For several months, Fine Gael has been concerned about its standing in rural Ireland. Published and private research as well as the everyday contacts that make up such a large part of TDs’ work all led to a growing nervousness among Fine Gaelers that they were being overtaken by Fianna Fáil in rural areas.

The Taoiseach and senior Ministers have been talking about it privately for months.

Now, with two big announcements aimed at rural Ireland in the last week – broadband last week and an EU/Government package for beef farmers today – Fine Gael hopes that it can reverse the tide by demonstrating its concern for rural communities in tangible financial terms.

Government denies any causation in the coincidence. Pull the other one, says everyone else. EU agriculture commissioner Phil Hogan gravelly tut-tutted any notion that this was connected to the election. But you wouldn’t have to be the world’s greatest cynic to spot a link.

Whatever about the medicine, the illness was fairly apparent. Look at just a few numbers from the Ipsos MRBI series of polls for The Irish Times. In late 2017, Fine Gael maintained a healthy lead over Fianna Fáil in rural areas; among farmers, it was 40 per cent to 26 per cent.

Driving those numbers was a sense among farmers that things were generally going in the right direction for the country; 69 per cent of farmers agreed, against just 22 per cent who felt they were going in the wrong direction.

So even if you believe the Government that the broadband and beef announcements have nothing to do with the local elections, it’s clear that Fine Gael had – or did have – a problem in rural Ireland. The indelicate question is: will the moves swing any votes?

The evidence for big promises buying votes is mixed; throwing money at problems doesn’t necessarily guarantee success. But in some cases, doing nothing about problems can certainly presage political failure.

Farming organisations warned Fine Gael that they would pay a price at the election unless they produced a package for beef farmers. With the package duly produced, Fine Gael will expect that beef farmers keep their side of an implicit bargain.

Even if they do, though, and even if rural communities are sufficiently impressed with the broadband plan that they return Fine Gael councillors and MEPs in their droves, this sort of thing doesn’t come without a cost. Fine Gael TDs and party sources admit to some disquiet on the doors in Dublin.

More generally, Fine Gael’s fiscal and economic credibility has taken a battering in recent months; big announcements before an election are all very well, but they don’t help you convince voters you are the responsible choice to steer the economy and the public finances. And if Fine Gael doesn’t have that, what exactly does it have?