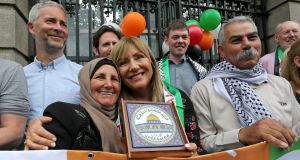 A Bill prohibiting the importation of Israeli goods produced in settlements in the Palestinian territories has passed in the Seanad.

The Control of Economic Activity (Occupied Territories) Bill 2018, a private members Bill proposed by Independent Senator Frances Black, will make it an offence to purchase goods and services from Israeli settlements which have been condemned by Ireland and the EU as illegal.

The Bill, passed its first vote in the Seanad by 25 votes to 20 with the support of Fianna Fáil, Sinn Féin, Labour and several independent senators.

Fianna Fáil support is crucial to the bill as it is strongly opposed by the Government. Tánaiste and Minister for Foreign Affairs Simon Coveney has been active in lobbying Fianna Fáil members against it.

Ms Black said the passing of the Bill’s second stage reading was “testament to the fact that this is not a radical act” and that the “bare minimum that should be expected of an EU member state and a country proudly committed to justice and human rights”.

“We are simply saying that, if we are sure that certain goods have been produced as a result of war crimes, we should not be trading in them,” said Ms Black. “How can we condemn the settlements as illegal, as theft of land and resources, but happily trade in the proceeds of this crime?”

The Israeli embassy in Dublin condemned the Bill, describing it as a “populist, dangerous and extremist anti-Israel boycott initiative” that would hurt the chances of dialogue between Israel and Palestine.

“It will have a negative impact on the diplomatic process in the Middle East,” claimed a statement from the Israeli embassy. “The absurdity in the Seanad Éireann initiative is that it will harm the livelihoods of many Palestinians who work in the Israeli industrial zones affected by the boycott.”

It added that Israel would “consider its response in accordance with developments regarding the legislation”.

A statement from Ms Black’s office said that despite condemnation of settlements by the EU, UN and the Irish Government, natural resources and agricultural produce continue to be extracted from occupied land before being exported and sold around the world.

“In the last 18 months, the Israeli government has intensified its expansion onto Palestinian land at an increased rate and continued to forcibly remove Palestinian families from their homes and land against their will,” it wrote.

Christian Aid Ireland, which has strongly supported the Bill, said the Seanad’s vote would send an important message across the globe that international law exists to protect people and their rights.

“For too long settlements and the produce that comes from them have been at the expense of Palestinian rights, forcing them off their land and into poverty,” said chief executive of Christian Aid Ireland Rosamund Bennett. “Today’s vote was a vote in support of the rule of law, for justice, and for human rights. We look forward to continuing to support the passage of this important legislation through the Oireachtas. ”

Chairwoman of the Ireland-Palestine Solidarity Campaign Fatin Al Tamimi welcomed the vote and commended the State for “making history and leading the way in its solidarity with the Palestinian people”.

Ms Al Tamini said Israel’s reaction to the vote highlighted the vulnerability of Palestine under international pressure and urged other nations to take similar measures to end “seven decades of oppression”.

The Bill was first tabled in the Seanad in January 2018 but was delayed until June after Israeli prime minister Benjamin Netanyahu ordered that Ireland’s Ambassador to Israel be summoned to account for the proposed law.

Mr Netanyahu’s condemned the Bill as seeking to harm Israel.

Mr Coveney was sharply critical of the Israeli settlements at the time and said the Government shared the objectives of the Bill to pressure Israel to withdraw from settlements.