‘People voted for change,’ says Tánaiste, and it’s up to Sinn Féin to form a government 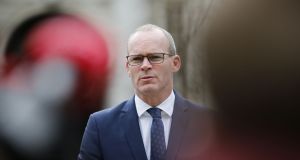 Fine Gael wants to “show some humility” and to recognise how the electorate has voted for an alternative government, Tánaiste Simon Coveney has said.

Defending his party’s decision to plan for opposition rather than government, Mr Coveney said: “People voted for change.”

Some political parties had made promises that “don’t reflect reality”, he added.

The onus was now on the parties who got the most votes and the most seats to show leadership, Mr Coveney told RTÉ radio’s Morning Ireland.

Sinn Féin president Mary Lou McDonald wanted a government of the left, so she should form one. “The numbers are there,” he said.

Irish politics was now fractured, Mr Coveney said, and for the first time ever there was no party with more than 25 per cent of the vote. “The new reality is very complicated.”

He said he had always wanted to be in a position of responsibility but there were some who were happy to remain in opposition with no responsibility. “Now the onus is on them to deliver change.”

Fine Gael now saw its future in opposition, although the party was not going to tie its hands.

Everybody in Dáil Éireann had a responsibility to provide stable government but he said he hoped it would not take 74 days to form as had happened the last time. “I felt every one of them.”

The Social Democrats have withdrawn from a scheduled meeting on Tuesday with Fine Gael in light of the latter party’s stance.

“It is clear to all that Fine Gael are now engaged in a game-playing exercise and we refuse to participate in what is essentially theatrics by Fine Gael,” the SocDems said in a statement.

“While it was always the case that we were unlikely to find much common ground with FG, we intended to honour our commitment of engaging openly with all parties. Clearly Fine Gael’s intention is to engage in shadow-boxing for the coming weeks and we’ve no interest in participating in such a charade.”

Independent Kerry TD Michael Healy-Rae said he would meet with Sinn Féin on Wednesday. “It would be bad manners to say no,” he told RTÉ radio’s Today with Séan O’Rourke show.

“People voted for change, the majority voted for Sinn Féin. It makes no senses to go back to the country, to ask the same question again. An election costs €40m to €50m. The people have spoken, it’s now up to the politicians to talk. It’s nonsense to say they are going into opposition.”

Mr Healy-Rae said there were great concerns about how Sinn Féin was going “to pay for what they proposed”.

Galway West Independent TD Noel Grealish said the three main parties needed to talk. “Independents always put their shoulder to the wheel. There are a lot of Independents willing to support the government.”

However, Mr Grealish said Sinn Féin leader Mary Lou McDonald had said that she would not talk to him.

Mr Grealish predicted that Ms McDonald would get the most votes on Thursday in the Dáil if there was a vote for Taoiseach but “the numbers are there” for a Fianna Fáil/Fine Gael/Greens coalition and that “some Independents willing be willing to talk to them”.

“We want to get down to the serious business to see what opportunities are there. This isn’t about maths, it’s about agreeing to a programme of change. If it’s going to be Fianna Fáil and Fine Gael then nothing changes. They caused the problem.

“We want a serious policy conversation. We are open to talking to all parties. We want to be in government.”

Speaking after a six-hour meeting of the Fine Gael parliamentary party on Monday, Taoiseach Leo Varadkar did not rule out Fine Gael entering government with Fianna Fáil, but added: “I don’t foresee that happening.”

“The future is about leading the party into opposition,” Mr Varadkar said after the meeting in Leinster House.

Mr Varadkar has no mandate from his parliamentary party to enter government negotiations, but said he can meet with other parties to share views and analysis on the election, beginning with the Social Democrats on Tuesday.

According to those present at the meeting, the overwhelming view was that Fine Gael should go into opposition, while keeping participation in government – aside from an arrangement with Sinn Féin – open as a last resort.

Those who spoke against the idea of a coalition with Fianna Fáil included Minister for Rural Affairs Michael Ring and Dublin South West TD Colm Brophy, while Minister for Communications Richard Bruton is said to have suggested the possibility of the main parties entering a Danish-style minority government arrangement.

Tánaiste Simon Coveney and Minister for Justice Charlie Flanagan kept open the prospect of government with Fianna Fáil, if it was needed in the national interest.

Minister for Agriculture Michael Creed questioned if Mr Varadkar should put his name forward in the vote for Taoiseach when the 33rd Dáil meets on Thursday. Mr Varadkar said he will do so.

It is understood that Green Party leader Eamon Ryan will also put his name before the Dáil. A number of left-wing TDs said they are considering supporting the candidacy of Sinn Féin leader Mary Lou McDonald.

On Monday, Ms McDonald said it was still possible for her party to lead a minority government of the left without the involvement of Fine Gael or Fianna Fáil

Her comments reflect a change of emphasis following remarks by her colleague Eoin Ó Broin on Friday that it would be impossible.

“All options are still on the table but we’re all able to count,” Ms McDonald said, “we’re able to add, and we’re able to subtract so I think we have recognised that the mathematics are tricky.”

Other Fine Gael TDs who raised concerns at Monday night’s meeting about coalition with Fianna Fáil were John Paul Phelan and Peter Burke. Both are understood to have questioned why Fine Gael would say it is both preparing for opposition while leaving open the option of entering government.

Minister for Health Simon Harris also said government participation should be kept on the table, although some present noted that Minister for Finance Paschal Donohoe did not express a view..