Minister for Social Protection has sought limit to spending on electioneering 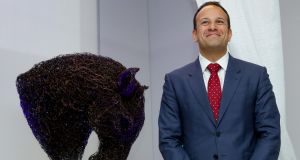 Leo Varadkar has asked for campaign spending limits to be imposed by Fine Gael, in a move seen as raising the issue of the family wealth of his rival, Minister for Housing Simon Coveney. Photograph: Maxwellphotography.ie

Minister for Social Protection Leo Varadkar’s attempts to influence the ground rules of the forthcoming leadership contest in Fine Gael look set to be rejected by the party hierarchy.

He had asked for campaign spending limits to be imposed by Fine Gael, in a move that was seen as raising the issue of the family wealth of his main rival, Minister for Housing Simon Coveney. This was denied by those close to Mr Varadkar.

It comes as Mr Coveney’s supporters have used private polling, funded from their campaign, to see which candidate is more popular in constituencies where sitting TDs and councillors’ votes are up for grabs. The methodology and accuracy of the polling is strongly disputed by the Varadkar camp, however.

Damien English, Mr Coveney’s director of elections, and the Minister of State for Housing, is standing over the data.

The rejection of Mr Varadkar’s call for spending limits follows on from his push for a televised debate between leadership candidates also being turned down.

The issue of spending limits was discussed by a small group within Fine Gael late last week and will likely be discussed at a meeting of the party’s executive council on Tuesday night. No final decisions have been taken.

Mr Varadkar’s request is set to be rejected, however, because it would be “impossible” to implement, according to sources. But there will be some limits placed on the amount of electioneering each candidate can engage in, which sources say is an effort to move somewhat to Mr Varadkar’s position.

“Electioneering” has yet to be fully defined. It could mean the amount of times each candidate can post leaflets to the estimated 25,000 rank-and-file members who have a vote. Each mailshot will cost an estimated €25,000.

Supporters of both Mr Coveney and Mr Varadkar are prepared for the long-awaited contest to begin this week. It is also understood that Mark Mortell, the former senior Fine Gael strategist, is providing advice to the Varadkar campaign in the background.

Taoiseach Enda Kenny has told his friends he will make an “announcement” at Wednesday’s parliamentary party meeting, although he has not specified what that announcement will be.

“I think he knows if it drags on much longer it could be messy,” one friend said. “He has put so much into the party I don’t think he’ll want to damage it. He wouldn’t want to leave that type of legacy.”