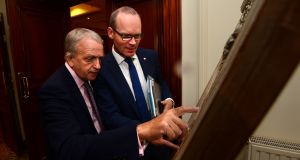 Fine Gael has instructed its councillors not to enter into any pacts with Sinn Féin on local authorities after the local elections this Friday.

Tom Curran, the party’s general secretary, is sending a note to the chairs and whips of Fine Gael groups on every local authority outlining the policy and enclosing the Fine Gael code of conduct.

Mr Curran’s email says that “entering into powersharing with Sinn Féin is not allowed except where the D’Hondt system or a similar powersharing arrangement is already in place”.

Party sources said this meant Fine Gael would not co-operate with Sinn Féin unless there was an agreement on any local authority that all parties and Independents on the council would work together. Cork County Council, for example, has operated the D’Hondt system of powersharing.

Mr Curran says the Fine Gael groups on each council should meet next week “as soon as practicable after the conclusion of the count process” and suggests these meetings should take place next Monday, May 27th.

The agenda for these meetings, according to Mr Curran, should include the nomination and election of Fine Gael group leaders and whips, and a “discussion on whether FG is in position to form a pact with other groups or Independents or go into power on its own”.

“Any councillor, who has engaged in discussions with councillors from other parties or groups, regarding the prospect of a partnership, should reveal this to the group,” Mr Curran says.

Party negotiators should also be appointed and a list of “all positions . . . which may be subject of negotiations should be made available by those convening the meeting, and distributed to all councillors”.

It is understood this means positions such as council chairs, as well as other posts such as committee chairs.

“If possible the group should agree instructions on a negotiating strategy and determine a date for a second meeting to assess progress and determine and agree further actions,” Mr Curran added. “In the event of any deal being done with other groups or individuals the detail should be written down and agreed by the Fine Gael group.”

In underlined text, the letter adds: “It is imperative the process of allocating positions is fair and does not discriminate against new councillors, who may not be aware of whether committee positions are more/less financially lucrative.”