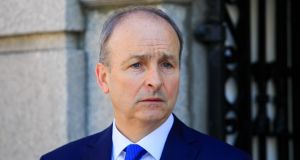 Fine Gael needs to prepare for a general election as soon as possible, a private meeting of the parliamentary party has heard.

Minister for Rural and Community Development Michael Ring is understood to have told the meeting on Monday evening that the grassroots of the party don’t want the proposed coalition with Fianna Fáil and that the general public don’t have an appetite for it either.

He is also understood to have said that Fine Gael needs to prepare its candidates for an election as quickly as possible.

According to sources, Mr Ring is understood to have strongly criticised Fianna Fáil including in relation to promises around the pension age.

Party senator Michael Darcy also questioned the Taoiseach on whether there was a “Plan B” in case government formation talks did not succeed.

Taoiseach Leo Varadkar said there was no Plan B and that to have such a plan would be disingenuous.

Tánaiste Simon Coveney also provided the party with an update on the negotiations for a programme for government.

The meeting heard that talks are accelerating and could be wrapped up in two weeks’ time.

After this, two weeks will be set aside for each party to consult with its membership, meaning that a government could be formed by mid June should those steps be successful.

The parliamentary party meeting also heard criticism of the lack of a comprehensive plan to provide childcare for frontline workers.

Senator Tim Lombard called for the Minister for Children Katherine Zappone to appear before the parliamentary party over the issue.

Sources present said Mr Lombard expressed a view that the lack of a comprehensive plan represented a major gap in the Government’s response to Covid-19.

The meeting between Mr Varadkar, Mr Martin and Mr Ryan was arranged before the weekend. However it came after their two parties traded sharp exchanges about a report in The Irish Times on Saturday disclosing that Department of Housing official were involved in contingency planning for a general election. Fianna Fáil TDs claimed that Fine Gael was hedging its bets on government negotiations, while Fine Gael described the attacks as having damaged the talks process.

While the long duration of the meeting was received with some surprise, it was described privately by sources from one of the two parties involved as having concluded amicably.

There was a full plenary session on Monday afternoon involving each member of the negotiating teams from the three parties. According to several of those present, the meeting was focused and professional, with a greater urgency that during talks last week.

For the first time, there was agreement between the three parties on text that will be included in the programme for government. They related mainly to justice and foreign affairs, touching on issues such as overseas development aid.

Sources from all three parties described the atmosphere as positive. The Green Party team is said to have remained united notwithstanding the internal divisions caused by the decision to enter coalition talks.

However, the crux period for the negotiations will start on Tuesday when the negotiating teams begin to discuss climate policy. That will be the make-or-break issue for all three parties, particularly over the Greens’ demand for an average cut of 7 per cent per annum in greenhouse gas emissions, effectively halving Ireland’s overall emissions from 60 million tonnes of CO2 to 30 million tonnes by 2030.

This issue was the first on the list of 17 demands asked of the other two parties by the Greens. The party has stated that any potential coalition will need to set out clear and ambitious targets and timetables in relation to the reduction of carbon emissions.

A spokesman for Mr Varadkar said the talks were proceeding following a “good meeting” between the leaders on Monday.

In a statement released after the meeting, the parties said “the leaders reaffirmed their commitment to successfully concluding the talks and to negotiating in good faith.

“They reaffirmed that the talks will remain confidential and a running commentary will not be provided to the media from any of the parties on matters being discussed in the talks.

“All parties are working to conclude a draft Programme for Government by the end of the month and for its consideration by each party in accordance with their respective arrangements thereafter.”

A statement released by Fine Gael on Sunday said “officials were only doing their jobs by scenario planning for all eventualities”.

“The Constitution and the law are clear on this. Elections, by-elections and referenda must happen within defined timeframes once vacancies arise. There is no specific provision for public health emergencies (eg pandemics) envisaged in the Constitution or the law.”

Coronavirus: One death, 25 new cases reported in State 18:25
Children who go abroad must self-isolate for 14 days before return to school in September 18:10
Angry Taoiseach calls for resumption of work on new National Children’s Hospital 17:56
Man tried to steal cars while high on crack and holding chihuahua 17:51
Judge gives landlord a week to halt Covid-19 parties near UCC 17:32