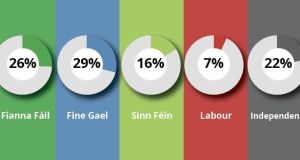 Irish Times/Ipsos MRBI poll: State of the parties, when undecided voters are excluded

The Irish Times/Ipsos MRBI poll, published on Saturday, shows support for Fine Gael has dipped below 30 per cent for the first time since February 2017, to 29 per cent.

Fianna Fáil has gained ground in the poll, up by two points to 26 per cent.

Independents/others have also recorded an increase, up three points to 22 per cent.

The Labour Party is beginning to show signs of recovery, with support up by one point to 7 per cent.

However, the news is not positive for all Opposition parties as Saturday’s poll measures support for Sinn Féin at 16 per cent, a five-point decline since the last Irish Times/Ipsos MRBI poll in March.

Fieldwork for Saturday’s poll took place between Monday and Wednesday of this week among a nationally representative sample of 1,500 eligible voters and notably in the middle of campaigning for both the European and local elections. Interviewing was conducted face-to-face, in-home, across all 40 constituencies, and asked respondents how they would vote in a general election.

The decrease in support for Fine Gael (down by one point to 29 per cent) marks the second consecutive drop for the party, albeit a very marginal one. The most notable decline for Fine Gael is in Dublin where support is down 7 points to 28 per cent.

Fianna Fáil has managed to increase support by two points to 26 per cent, narrowing the gap on Fine Gael to just three points.

With 22 per cent support (up three points), Independents/others find themselves in their strongest position since October 2016, helped by an increase in support for the Green Party, (up by two points to 4 per cent). Perhaps the context of the European and local elections is giving a leg-up to Independent candidates and smaller parties focused on the environment or local issues.

Sinn Féin registers its lowest support level since July 2016 at 16 per cent. Support for the party declined across most demographics. The most significant fall is among younger voters (18-24 years), down 24 points to 21 per cent.

At 7 per cent, support for the Labour Party has reached its highest level since the 2016 general election. Support for the party is now at 12 per cent in Dublin, a three-point increase since our last poll and their strongest showing in Dublin in almost four years. The party has gained support among both 18-24 year olds (up five points to 6 per cent) and those aged 65 and over (up three points to 8 per cent).

Support for Fine Gael in the local elections stands at 27 per cent, followed by Independents/others at 26 per cent, Fianna Fáil at 25 per cent, Sinn Féin at 15 per cent and Labour at 7 per cent.

Voters were also asked what was most important to them when choosing a local representative.

The most important reason to vote for the Labour Party is “because of where the candidate stands on a particular issue” (27 per cent).

While local issues matter more in local elections, voters will mostly remain loyal to their party affiliation, and the majority of local representatives will ultimately be sourced from Fine Gael, Fianna Fáil and Sinn Féin.

Aisling Corcoran is a director of Ipsos MRBI