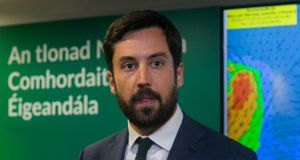 Fianna Fáil will abstain on the motion of no confidence in the Minister for Housing Eoghan Murphy next week, ensuring that the motion will likely be defeated once the Government maintains support among a hand of Independent TDs.

Senior Fianna Fáil sources confirm that the motion in Mr Murphy – about whom the party’s TDs have been highly critical – is covered by the confidence and supply agreement with Fine Gael and the party will therefore abstain in the vote next Tuesday.

If the motion is passed, it could trigger a general election over Christmas.

However, Mr Murphy will need the support of Independent TDs who usually vote with the Government to retain the confidence of the Dáil. Questioned about their voting intentions earlier today, Independent TDs did not commit one way or the other.

The Social Democrats announced on Wednesday morning they would table a motion of no confidence in the Minister next week.

Sinn Féin said it would support the no-confidence motion, while the Greens, Solidarity-People Before Profit and left-wing Independent TDs are likely to vote against Mr Murphy.

Fianna Fáil confirmed it would abstain, meaning that Independent TDs who usually support the Government should see the motion defeated. They voted with him last year in a motion of confidence the Minister won by 59 votes to 49, though several refused to be drawn today on how they would vote next week.

Michael Harty, the Clare Independent, said he had only just become aware of the motion and would consider his position over the coming days. Peter Fitzpatrick, the former Fine Gael TD who is now an Independent, also said that he would think about it and make up his mind by next Tuesday.

Independent TD Denis Naughten said that he would talk with his local supporters and councillors in advance of the vote and would be guided by them.

Independent TDs Noel Grealish and Michael Lowry, who both supported Mr Murphy in last year’s vote, did not respond to messages asking about their voting intentions. Nor did Michael Healy-Rae, who did not vote on the no-confidence motion last year.

Mr Murphy will also be without the vote of Frances Fitzgerald, who is now an MEP, though the former TDs Clare Daly and Mick Wallace who voted against him last year, are also gone from the Dáil to Brussels. Following byelections on Friday, four new TDs will be eligible to vote in the confidence motion on Tuesday.

Privately, many TDs regard the announcement of the Social Democrats motion as a stunt in advance of the byelections on Friday, with many political sources querying whether they are really prepared to trigger a Christmas election. However, Government whips will need to secure the support of Independents over the coming days if they are to be sure they can safeguard Mr Murphy – and the Government’s – survival.