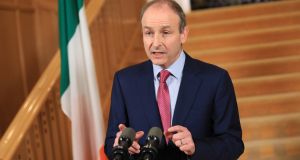 Taoiseach Micheál Martin at Government Buildings in Dublin this week, where he addressed the nation on the latest Covid plan. Photograph: Julien Behal Photography/PA Wire

For the two big Coalition parties, the last week of February became the week of the Big V. Not Vaccines, nor Variants, though both were writ large as the Covid-19 pandemic trundled on. Rather it was Vexation – impatient, frustrated, plain angry.

For the first time since the difficult first week of the Government’s life there are real concerns within the ranks of Fianna Fáil and Fine Gael, with such feelings spilling over in both parliamentary party meetings this week.

In Fine Gael, there is frustration and fears over the feasibility of the grand coalition with Fianna Fáil. In Fianna Fáil, however, the sense is of a deeper criticism, with echoes of 2010, when the party collapsed.

And it is not only the arch-critics, like the frequently vocal Sligo-Leitrim TD Marc MacSharry, who are expressing concern about the party’s health – it is also middle-ground TDs and Senators.

In the fortnight running up to the unveiling of the latest Covid plan, Taoiseach Micheál Martin gave a raft of interviews, with some believing he was trying to remove doubt that he is the one in charge, rather than Tánaiste Leo Varadkar.

However, he overcompensated. By the time the plan was unveiled, there was little in it that had not already been indicated. Quoting Boris Johnson, Micheál Martin said he was more interested in data than dates. But the plan contained no data, or metrics – not even indications of such.

It also confirmed the suspicions among some backbench TDs in Fianna Fáil and Fine Gael that it is the National Public Health Emergency Team (Nphet), and especially the chief medical officer, Tony Holohan, that is calling all of the shots.

Spooked by the spread of a new Covid-19 variant and the huge case numbers in January, the Government “can’t give the numbers for when things might change because Nphet won’t give them the numbers. It’s hugely frustrating,” said one politician. “This should be a political decision.”

“The reality here is what we have is Level 5 lockdown for another 12 weeks but the Government is afraid to say it. There is no way we are going to go to Level 3, or Level 4, in April. We are totally dependent on the vaccine being rolled out before easing,” the source added.

To compound the misery for Fianna Fáil, TDs groaned when the party’s Minister for Health Stephen Donnelly got things badly wrong about the status of negotiations with teaching unions on school reopenings on RTÉ’s Claire Byrne Live on Monday night.

Then on Wednesday night, Fianna Fáil’s sense of misery was complete when an Irish Times/Ipsos MRBI opinion poll showed its support at 14 per cent. Things are not good, and action needs to be taken to steady the ship, many Fianna Fáil TDs feel.

“Morale is on the floor,” was the verdict of one Fianna Fáil TD who is not normally a critic. “I know the Government has been doing a very difficult job. Communications has been a disaster. It is reflecting badly on all of us.”

Micheál Martin, said this TD, is so busy that he does not have time to prepare properly, and he is not keeping his own colleagues in the loop: “He needs to stop and start doing what Leo Varadkar was doing, being far more strategic with his statements, his speeches, his announcements.”

“Stephen Donnelly made a big mistake on Monday night. We all recognise that Stephen is lumbered with stuff and he has had threats to his family. But when the Government is poor, it reflects very badly on all of us,” the TD declared.

The sense of vexation in Fine Gael is more measured. The criticism of Fianna Fáil cock-ups at Fine Gael’s parliamentary party gathering on Wednesday dominated coverage afterwards, but it did not reflect the overall mood of the meeting, Fine Gael TDs say.

In fact, a lot of the ire was actually directed against the vagueness of the latest Covid-19 plan. “We are at that moment when things can drift away from us if we don’t respond. Look at the public. Some have already made up their minds that we’re out. Others will make up their minds after vaccine rollout. If we mess up on that we are gone.

“The Government has staked its reputation on vaccination rollout. If a new variant gets in first, it will be difficult. The mood was actually [that] the Government is not doing that bad a job,” said one TD who was at the meeting.

On the Fianna Fáil side, recent mixed messaging is seen as reflective of a wider problem. “We have no sense of mission,” says a senior TD usually loyal to the party’s leadership. “We are not working on the sense of being a cohesive Government.”

A colleague, also speaking privately, makes a deeper criticism. “There is an element of bad luck. We had a bad start and Covid dominates everything. But where we are now reminds me of the bad days of 2010 when everything was falling apart.

“We were in a frozen bubble and in collective paralysis. We know we are unpopular and the barbarians are at the gate. We have no strategy. Micheál has been brave in the past, especially on the Eighth Amendment.

“Now he has failed to articulate a vision and he has discouraged a wider tent. People who want to pitch in ideas on policy have been frozen out,” said the Fianna Fáil TD, one of many who spoke to The Irish Times.

However, in contrast with the experience of the other two parties in Government, the past week was a better one for the Green Party, which has suffered its own travails over recent months with internal divisions and bitterness.

Now, however, its members feel it has negotiated its way through two stumbling blocks – the controversial EU-Canada Ceta trade deal, which is now set to go before the Oireachtas European affairs committee, and a row in relation to the mother and baby homes commission, which has abated now that recordings of testimony before the commission have been salvaged.

Green Minister for Integration Roderic O’Gorman published a White Paper on Friday setting out a pathway to end direct provision. Party leader Eamon Ryan’s major climate action legislation looks set to be published next week. The party also got a boost from The Irish Times opinion poll on support for the parties.

“The mood is good,” said a member of its parliamentary party. “Things feel like they have settled down. There is more of a sense of solidarity than there has been since we entered Government. We are now dealing with some of our really key policies.”