Biding its time won the race for the party and solidified its leader’s position, for now

The general election is over in Dublin. As the RDS empties itself of political supporters, journalists and election paraphernalia Harry McGee reports on the overall picture from #GE16 . Video: Bryan O’Brien

In less than five years Fianna Fail have managed to change the public's perception of them. Political correspondent Harry McGee explains how they did it. 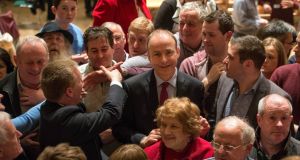 Up for the count: Micheál Martin celebrates his re-election in Cork. Photograph: Michael Mac Sweeney/Provision

Micheál Martin has never been in a stronger position as Fianna Fáil leader.

His position is analogous to that of Claudio Ranieri, the manager of unglamorous Leicester City. Leicester have confounded all expectations and are leading the English Premier League going into March.

What Martin and Ranieri share is that both have caught a wave. And at this moment neither is viewed as capable of putting a foot wrong.

Politics is a fickle business, and Martin’s current unassailable strength may look much less secure in six months’ time, depending on what emerges after March 10th, when the new Dáil convenes. Still, for the moment, within Fianna Fáil, he will brook no criticism.

That was illustrated yesterday by a smart and bold move by Martin. He issued a long statement about political reform. It suggested that the public have looked for it, but that politics has not delivered it.

Rather than wait for a new government to be formed and then decide on reform, he said, parliament should decide its own fate. He said individuals and representatives of all groups should get together now and organise into committees.

In short order, they would be expected to come back and report on what reforms should be implemented. They would then be put into effect by parliament itself before the formation of any government by an agreed change to the standing orders on the first day of the new Dáil.

Martin’s statement was issued before the dust had settled on the general election – indeed, before all the seats have even been filled.

By getting in with an early pitch, Martin signalled that Fianna Fáil was no longer an enfeebled bunch of 20 male TDs, but rather a much stronger and more robust proposition that would not let others dictate how the Dáil would arrange itself.

Strategically, it was neat.

The outcome of the election has been more uncertain than any other in Irish electoral history. The yawning gap between the seat numbers of the main parties and the seat numbers required to attain a majority will result in either a heterogeneous coalition, or perhaps a very convoluted and fragile arrangement: the classic house of cards.

That has resulted in eyes being cast to comparable situations in Europe, such as those in Greece, Portugal, Belgium and Spain, where no party was within striking distance of forming a government. In a clever piece of anticipation, Fianna Fáil’s early move calls for a more European approach, wherein parliament has real power rather than just being a glorified talking shop.

The move reflects the increased muscle of Fianna Fáil as well as Martin’s own authority within his party. His aides say there was never a sense that Martin lacked authority. But the significance of the election results means that questions about his leadership (which have niggled since 2010) have been well and truly dispensed with, for the moment.

In truth, a challenge to Martin’s leadership was never a realistic option. There was occasional sniping from the likes of John McGuinness, who made his own pitch for leadership, and Éamon Ó Cuív, who did not endear himself to colleagues when he said the party seemed to be “becalmed” in opinion polls.

And there were setbacks.

On its last legs

In 2011, some commentators were confidently predicting that Fianna Fáil was on its last legs. So Martin and the party essentially borrowed the template that Frank Flannery had developed for Enda Kenny when Fine Gael faced a similar existential crisis nearly a decade earlier.

It included the introduction of a one-member, one-vote system; the cultivation of young new candidates; an effort to reconnect to its founding principles; and a ditching of the vulgarities and excesses that had come to the fore in recent decades.

There were stumbles along the way.

When the Protection of Life During Pregnancy Bill came before the Dáil, the younger modernisers wanted Fianna Fáil to back it, but it was fiercely resisted by the more reactionary members of the parliamentary party (mainly senators). Martin was forced into conceding a free vote, which he claimed as “reformist” but was perceived as a weakness.

That faultline between the party’s conservative and liberal forces has also materialised in relation to the issue of repealing the Eighth Amendment.

Fianna Fáil has had an uncomfortable relationship with opinion polls, and there is now emerging evidence that the party has tended to underestimate (for whatever reason) its true level of support.

That did not help Martin much during 2014, when Fianna Fáil was failing to gain any traction in polls and was getting roundly criticised for failing to come up with any alternative policies. It was also accused of flip-flopping on two charges for which the party itself had prepared the ground: property tax and water charges.

Its opposition was based not on the principle but on the manner in which the new Government had introduced the measures. To some critics, that seemed like a slightly Jesuitical argument.

The party had poor European elections, but did very well in the local elections by winning more seats than any other party. It used that result as a basis to argue that its support levels were higher than people thought. But 2014 culminated with two less than stellar performances in the Roscommon and Dublin South-West byelections.

Questions then truly began to be asked about Martin’s leadership. But Limerick TD Willie O’Dea scotched any such speculation with one of the great observations of the past five years. Referring to sniping colleagues, such as McGuinness, he said: “I say this with the greatest respect to my colleagues – I respect each and every one of them, but when I look around the table, in my mind’s eye, I don’t see the Messiah. And when I look in the mirror I don’t see him either.”

The byelections represented a turning point. Fianna Fáil had piloted polices for them, which formed the basis for its general election manifesto. Central to that was the message of fairness and the two-tier recovery.

Martin’s leadership was settled. A victory in the 2015 Carlow-Kilkenny byelection gave the party a much-needed fillip of confidence and buoyed the morale of its TDs.

Martin’s style of leadership is not dictatorial. It is his practice to consult and, indeed, like other politicians, he agonises over decisions. The party’s intellectual heavyweight is Michael McGrath, who is also a constituency colleague. That means a slightly tense relationship, but the two TDs have presented a united front and never quarrelled in public.

There was a strong effort by Martin and his advisers to cut any talk of it entering grand coalitions stone dead. As Fine Gael candidates were telling voters on the doorstep that Fianna Fáil and Sinn Féin would forge a deal, Martin dismissed any such arrangement vehemently in every public appearance, including the debates.

He will consult widely in the coming weeks as Fianna Fáil begins complex negotiations about arrangements that have never been contemplated before. These will include newer members of the much enlarged parliamentary party.

Micheál Martin is no Albert Reynolds, who had no scruples about sacking party opponents . But his newly strengthened position will allow him to ease out some of those who haven’t pulled their weight, or have been overly critical of his leadership.

Billy Kelleher: The Cork North-Central TD was director of elections and politically responsible for the campaign that saw Fianna Fáil more than double its number of seats. Now seen as a potential future leader.

Michael Moynihan: The Cork North-West TD does not seek the limelight but needed to be ruthless with candidate selection. A lot of noses were put out of joint. But it worked.

Michael McGrath: Another contender for future leadership, the finance spokesman put in a couple of big performances . He successfully parried a big Fine Gael claim of a €1 billion hole in Fianna Fáil finances.

John McGuinness: A persistent critic of Martin’s leadership, the Kilkenny TD has been chairman of the Public Accounts Committee. With such a large influx of new TDs, he might find it difficult to retain a high- profile frontbench position.

Eamon Ó Cuív: The veteran Galway West TD is sometimes a little too independent, and his musings on Sinn Féin in the past did not go down well with some colleagues. He is also more critical of Martin than others. His role may not be as prominent this time.

Mary Hanafin: The former government minister has had a testy relationship with Martin and had a big stand-up row with his people at the Fianna Fáil ardfheis. Could she have been a possible rival if elected? The question is moot, as Hanafin did not succeed in regaining a seat for the party in Dún Laoghaire.