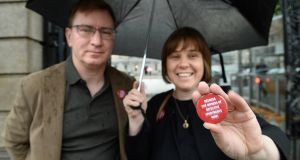 Fianna Fáil has promised to establish a €10 million redress fund for people whose homes have Celtic Tiger building defects if it is elected to government.

The €10 million would be taken from the exchequer and then, under its plans, be added to by the construction industry.

Only the most serious, emergency cases would have access to this fund, which would be separate to that available for pyrite and mica-affected homes.

The party has also promised to revise the remit of Home Building Finance Ireland to make low-cost, long-term loans available to the owners management companies of apartment blocks.

The party has also said it will put a ban on rogue builders who are found to be in breach of building regulations, though it is unclear how this would be implemented.

Further down the line, the party said it intends to provide tax relief to the owners of defective homes for remediation work carried out.

It is estimated that more than 90,000 apartments across the State are affected by defects such as water ingress, insecure balconies and a lack of fire-stopping material.

An Irish Times investigation running since December 2018 has uncovered defects in 33 developments comprising over 2,100 apartments in Ireland.

Owners have faced bills of up to €60,000 to remediate severe mould, collapsing roof canopies, rotting balconies and an extensive lack of fire-safety measures.

All major political parties have now committed to addressing the issue of Celtic Tiger building defects in their manifestos, The Irish Times understands.

The Green Party has promised an independent building standards regulator, which would not be paid for by the developer as it is at the moment.

It has also promised interest-free loans and tax relief on the remediation works carried out.

The party is also set to call for owners of defective homes to be exempt from property tax.

At present, owners of properties with a significant level of pyrite can apply for a temporary exemption from the property tax.

Sinn Féin housing spokesperson Eoin Ó’Broin said his party is calling for “a latent defects redress board to provide information to homeowners with mediation and adjudication to ensure where possible the developer pays for the remediation of any defects”.

The party also calls for “a fund, paid for by the construction industry and government to ensure that where the developer is no longer pursuable funds will be available so owners do not have to foot the bill for defects they did not create”.

The outgoing Fine Gael Government has declined to take any action to address the issue, repeatedly expressing concern about exposing taxpayers to an unquantifiable liability.

However, it understood that the party now intends to include measures to help owners of defective homes in their Election 2020 manifesto. Details of what these measures would be were not available at the time of writing.

The Labour Party has also committed to a package of measures to address boom-time building defects. These measures include low-cost loans and extra assistance where fire safety is found to be inadequate.

The Social Democrats will also address the issue in their manifesto, with their commitments based on the recommendations of the 2018 Oireachtas committee’s Safe as Houses report.

The Construction Defects Alliance met with Minister for State for Housing Damien English last Tuesday, as well as two senior officials from the Department of Housing, to discuss their concerns.

Spokeswoman for the alliance Kath Cottier said they had “constructive engagement” with the Minister but given the fact the meeting took place in the context of a general election “any real action on this matter will take place during the lifetime of the next government”.

“What’s contained in the manifestoes really represents ‘a toe in the door’ and that is why we will be continuing to engage locally and nationally with the parties and groupings to ensure that whatever the outcome of the election, the next Programme for Government will contain robust commitments to assist the owners of defective apartments.

“Only then will we really have a proper foot in the door, after which we will then seek to get into the room to engage intensively with the next government,” Ms Cottier said.