Citizens’ Assembly proposals on the issue would not pass ‘party, Dáil or country’ 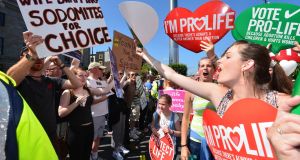 Fine Gael Ministers do not believe the recommendations of the Citizens’ Assembly for the legalisation of abortion will pass “party, Dáil or country” and will have to be significantly amended.

The party’s Cabinet members discussed the abortion issue at their weekly pre-Cabinet meeting on Tuesday at Government Buildings.

* No conclusions were reached, but several Ministers have confirmed to The Irish Times that most of those present believed the assembly recommendations, which suggest changing the Constitution and legislating for termination of pregnancy with "no restrictions as to reasons" but up to 12 weeks gestation only would not pass a vote in the Dáil and would not be passed by the electorate in a referendum.

Although Ministers were adamant they would await the conclusions of the special Oireachtas committee considering the assembly’s report, sources say the political reality is the recommendations are likely to be significantly amended. The all-party committee is due to report before the end of the year.

Some Ministers said it would be helpful politically if the Oireachtas committee would issue a direction as to what the referendum should ask and on what grounds abortion should be permitted in subsequent legislation.

Ministers believe they cannot propose legal changes they do not support and do not believe will pass into law.

Sources say this means a much more restrictive abortion regime is likely to be proposed by the Government.

It is understood Minister for Foreign Affairs Simon Coveney and the Minister for Rural Affairs Michael Ring both stressed they would not be in a position to support the recommendations of the assembly.

One Minister said the assembly’s proposals would not pass “party, Dáil or country”. Another said he shared that view “very much”.

Another said the discussion made it clear that any proposal for a change in the law – likely to be a referendum on the Eighth Amendment, followed by legislation – would have to be quite limited and not provide for a complete liberalisation of the law.

Taoiseach Leo Varadkar said this week that the Government hoped to bring forward an abortion referendum in May or June of this year but he has reserved his position on whether he will personally campaign for the referendum.

Ministers were also advised a Referendum Bill would have to be introduced in the Dáil by February 14th next to allow for a referendum on June 8th. The Taoiseach admitted the timeline was tight but insisted it was achievable.

Minister for Health Simon Harris defended the Taoiseach’s position, insisting it was the appropriate approach for Mr Varadkar to take.

He told The Irish Times the question to be decided by the people does not yet exist and that he too would wait and see the recommendations of the committee before deciding how he will vote. He said he expected the Government would take a position on the referendum “come the time”.

However, Ministers say privately that the Government could only bring forward a referendum proposal that its members would personally support with one saying several of his colleagues would not support a liberal abortion regime along the lines of that in the United Kingdom.