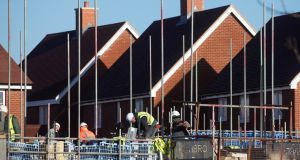 One party member said the Land Development Agency should not pay above market value for land. File photograph: Chris Ratcliffe/Bloomberg

Minister for Housing Darragh O’Brien is facing pressure from his party colleagues to strengthen affordability provisions in landmark legislation on housing amid claims a “core Fianna Fáil” policy is at stake.

The party’s internal housing committee met during the week to discuss the Land Development Agency bill, with concerns expressed by members that the delivery of affordable housing be seen as a key Fianna Fáil achievement in Government.

A note of the meeting says “Fianna Fáil provided working people with homes” from the 1930s to the 1980s.

The note goes on to specify several amendments to the Land Development Agency bill, which is currently before the Oireachtas. These include a new definition for an affordable price, “based on cost of construction and average incomes”.

Housing is a core Fianna Fáil value, one committee member told The Irish Times. “It is what cycling is to the Greens and Palestine is to the far left”.

“One of the concerns is that the Bill isn’t radical enough,” said the member, adding that measures should be introduced to ensure that the Land Development Agency doesn’t pay market price for public lands.

Among the other issues with the Bill to be addressed, according to the minutes of the meeting, are a “benchmark [for] land value against existing use value”, and ministerial regulations which would stipulate that a minimum of 50 per cent and a maximum of 90 per cent of land in schemes be for affordable housing.

Mr O’Brien has already indicated that the Bill will ensure a minimum of 50 per cent, and his support for up to 90 per cent. The internal party committee also want the title of the Bill to change to “reflect [the] objective of using public land to deliver public housing”.

During a speech on the second stage of the bill, Mr O’Brien indicated that he would put guidelines on what constituted “affordable”, and it is understood his preference is to do so in regulations rather than in statute, to enable more flexibility, and to allow for regional variations. He told the Dáil that the Bill defines affordability as “below the median market rate”.

Senator Mary Fitzpatrick, the chair of the party’s housing committee said the Bill “can be strengthened” and the LDA could ensure that the State makes a “radical and sustainable intervention” in the provision of social and affordable housing.

“It has the potential to do that, we have to ensure the maximising of the land’s potential for social and affordable housing, and the affordability elements, are both copperfastened and guaranteed.”

Senator Malcolm Byrne, who is on the committee, said the view in the party is that Mr O’Brien is performing well but “what we want to do is strengthen the legislation he’s bringing forward to make sure we deliver as many affordable homes as soon as possible”.

Labour housing spokeswoman Rebecca Moynihan said that, by the Government’s own metrics, affordable housing denotes paying less than 30 per cent of net income costs. “The average house price in housing hot spots like Dublin is nearly €400,000 and and the average cost of buying a house jumped 7.4 per cent in the last year,” she said.

“This Bill only says that housing offered has to be below market rates. Market discount is not acceptable, we need real affordability tied to peoples’ incomes.”