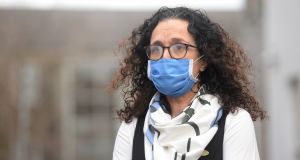 INMO general secretary Phil Ní Sheaghdha said there were some nurses working in intensive care units and emergency departments today who had not yet received the first dose of the Covid-19 vaccine . Photograph: Dara Mac Dónaill

Healthcare workers were abandoned by the State after schools were closed and left to provide childcare for themselves with no support, representative organisations have maintained.

The Oireachtas Joint Committee on Health was told on Tuesday that the Department of Health earlier this week had written to unions ruling out the provision of any financial payments to workers in the health service to offset the additional costs involved in providing childcare.

The vice-president of the Irish Hospital Consultants Association Dr Gabrielle Colleran said in Northern Ireland and Britain the children of healthcare woriers were still going to school, but there was no plan for staff in the Republic.

She said healthcare workers had been “abandoned by the State” when the schools were shut “ at a time when we went into work every day before we were vaccinated, putting our lives on the line and seeing colleagues getting sick”.

“My children and my colleagues’ children are being traumatised. They are falling behind. We are too tired and burned out to help them with homeschooling when we get home.”

“We are not working from home. We are not there to support them. “

The director of industrial relations at the Irish Nurses and Midwives Organisation (INMO) Tony Fitzpatrick said the health unions had been told by the Department of Health that “the additional cost of childcare was your problem”. He said this approach was an absolute disgrace.

The Department of Health told the unions in response to requests f for re-imbursement of additional childcare costs due to school closure that “given the current flexibilities in place, additional arrangements do not need to be put in place”.

The committee also heard strong criticisms of the manner inwhich the Covid-19 vaccine was rolled out last month.

INMO general secretary Phil Ní Sheaghdha said there were some nurses working in intensive care units and emergency departments today who had not yet received the first dose of the Covid-19 vaccine.

She said when the vaccine rollout commenced last month, there was not a focus placed on areas such as the border counties of Louth, Cavan, Donegal and Sligo where there was high levels of the virus in the community.

Ms Ní Sheaghdha said nurses in these locations were “devatated” that they had not been given priority.

“ Put simply, the vaccines’ initial distribution seemed to be based on the HSE’s administrative areas, rather than by where the virus was most prevalent.”

Ms Ní Sheaghdha also said there had been no clinical pathway put in place to assist nurses who were experiencing the longer-term effects of contracting Covid-19 including fatigue or cariac problems.

She also told the committee that there was a need to address the situation regarding pay for student nurses and midwives on placements in hospitals during the current pandemic. She said they were being exploited.

The director of industrial relations at the Irish Medical Organisation Anthony Owens said the Government could not hope to address the backlog of non-Covid patients on waiting lists without addressing the recruitment and retention of hospital consultants.

He said at the moment there appeared to be a “removal strategy” rather than a recruitment and retention strategy in place.

Dr Colleran warned there could be “an exodus” of medical trainees from the Irish system when the world opened back up after the pandemic because of the trauma they had seen in terms of how healthcare workers were treated.

She also raised concerned about a critical situation regarding the lack of beds in the country’s mental health system.

She said psychiatric consultants on call did not “even have beds for people that are suicdal”.