FF and FG concede many of Green Party’s key demands 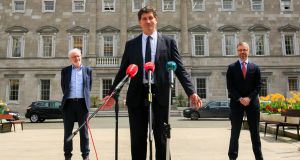 Fianna Fáil and Fine Gael have sought to persuade the Green Party to join formal negotiations on a new coalition government by conceding many of the party’s demands and promising a willingness to discuss the others.

In a response to the Greens’ 17 demands published last week, the two parties issued a joint document yesterday in which they agreed with the Green Party there is “now just a decade to make the changes necessary to halt the warming of our planet and to save our natural world”.

The two big parties committed to introducing a new climate Bill within the first 100 days of a new government that will enshrine in law the target of carbon neutrality by 2050.

Fianna Fáil and Fine Gael have asked that the three parties now begin work together on a programme for government to implement measures to revive the economy in a sustainable and environmentally friendly manner.

However, the two parties also say that many of the policy objectives raised by the Greens in their letter of 17 demands last week “need to be teased out during talks”.

Crucially, Fine Gael and Fianna Fáil say they are willing to increase the current 3 per cent target to reduce carbon emissions – the Greens insist on a 7 per cent annual reduction – but want to “understand and tease out” how the Greens’ targets would be reached.

“No party will want to introduce changes that will jeopardise employment or increase levels of poverty or have a negative impact on rural and regional development,” the FF-FG document states.

In their letter to Green Party leader Eamon Ryan, Leo Varadkar and Micheál Martin also agree to commit to a wave of investment in renewable energy and to end fossil fuel exploration. They also suggest they may be willing to mothball the proposed liquid natural gas terminal on the Shannon estuary, provided it can be replaced by other local projects, perhaps connected to renewable energy.

The two parties also say they are open to or in outright agreement with several Green demands on public housing, urban renewal, planning, public transport, a green procurement policy and reviewing the national development plan.

On financing the programme for the next government, the two parties say they will continue with deficit financing – ie borrowing – to “avoid the need for austerity and to simulate a recovery”.

They will reduce the deficit “once the economy returns to growth . . . in a gradual way so that growth is not stunted”, a move designed to assuage Green fears of a return to public spending cuts implemented the last time the party was in government.

What about EU budget rules?

The letter says the government should continue to borrow for capital projects – including housing, public transport, education and climate action – and then move to a broadly balanced budget.

However, it also commits to complying with EU budget rules, “noting that the general escape clause has been activated by the Covid-19 emergency”.

The parties’ response to the Greens ends by again requesting the three parties sit down together for negotiations.

The Greens’ parliamentary party met via teleconference on Wednesday morning but did not issue a statement. A spokesman said the party would meet again on Thursday for further discussions.

Several Green Party sources gave the document a guarded welcome and believe it is a basis for negotiating a programme for government, though others were disappointed that Fianna Fáil and Fine Gael did not commit to achieving the 7 per cent annual reduction in carbon emissions. If a programme for government is concluded, it must be ratified by a two-thirds majority in a vote of all members of the party.