Pádraig MacLochlainn asks if committee accepts ‘this precedent’ where would it stop? 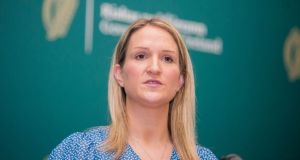 Minister for Justice, Helen McEntee e previously gave a statement on her handling of the Woulfe controversy, defending it and saying she followed a “clear process” when recommending the former attorney general for a position on the Supreme Court.Photograph:Gareth Chaney/Collins

Sinn Féin TD Padraig MacLochlainn has said that the refusal of the Minister for Justice Helen McEntee to participate in a full question and answer session in the Dáil is “really dangerous for our democracy.”

His comment comes as Opposition parties have temporarily withdrawn from the Dáil business committee amid a deepening row over Minister for Justice Helen McEntee’s refusal to entertain a full Dáil question and answer session on the Séamus Woulfe affair.

The business committee, which is supposed to meet on a Thursday to establish the next week’s parliamentary agenda, has been riven by infighting over the issue, with Opposition efforts to force a full question and answer session routinely being dismissed by the Government.

This has led to rows on the floor of the Dáil on Tuesday mornings, and the Government has been forced to use its majority to force through an agenda without the matter on it. Ms McEntee has committed to answering questions on the issue through her usual oral parliamentary questions, but this has been dismissed by the opposition as unsatisfactory.

Ms McEntee wrote to the business committee last week offering to address the issue in oral parliamentary questions at a time of their choosing, which the Opposition rejected.

Speaking on RTÉ radio’s Morning Ireland Mr MacLochlainn asked that if the committee were to accept “this precedent” where would it stop?

If the Opposition did not get their way they called for votes which were causing delays in the work of the Dáil. The Opposition had “the lion’s share” of speaking time, added Mr Griffin.

“The Opposition wants to make a circus of this. This is a witch hunt. They want to drag this on.”

Questions have been raised about the process of the Supreme Court judge’s appointment after The Irish Times revealed that three sitting judges also expressed an interest in the position. Mr Justice Woulfe came through the Judicial Appointments Advisory Board (JAAB) process and was the name given to Coalition party leaders.

Ms McEntee previously gave a statement on her handling of the Woulfe controversy, defending it and saying she followed a “clear process” when recommending the former attorney general for a position on the Supreme Court.