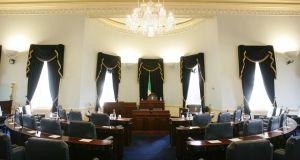 Taoiseach Enda Kenny and Tánaiste Eamon Gilmore have put their authority on the line in the referendum to scrap the Seanad.

Unloved the upper house may be, but that is not to say the vote will be a walkover for the Government. Far from it.

While it is plain to see that the economic crash has sapped credibility from the political establishment at large, it does not necessarily follow that the public will bow to the Coalition’s push to abolish the chamber.

Kenny and Gilmore have already had sour experience of a rejectionist public spurning their demand to give sweeping new powers of inquiry to Dáil committees. With pro-Seanad activists already arguing that abolition will concentrate too much power in the hands of TDs, the Taoiseach and Tánaiste went on the offensive yesterday when they published the Bill for the vote.

For Kenny it was a matter of a small country having too many politicians – and an unreformable Seanad which failed to shout stop when the Celtic Tiger set Ireland on the road to ruin. “If the last decade of misrule has proven anything it is that modern Ireland cannot be governed effectively by a political system originally designed for 19th century Britain.”

Although Labour is a little less enthused about Seanad abolition, Gilmore made the case that the vote was a fair elections in which everyone has a say. He also said two-chamber systems were more suited to federalist political systems in large countries such as the US and Germany. He threw in for good measure the argument that many second chambers – such as Britain’s House of Lords – served the narrow purpose of keeping restive former aristocrats sweet in the face of the democratic tide.

Each of these messages was calibrated to appeal to common sense voters who might see something futile in a Seanad which has always struggled for relevance.

For its critics the upper house and its denizens are something of an open goal.

A vacuous talking shop? A shallow chamber of last resort for failed or failing politicians?

An elitist little club for politicians who need not trouble themselves with the unforgiving democratic rigours of the general franchise? The expensive plaything of the political classes?

The Seanad is open to each of these charges, and many more indeed. For every Mary Robinson or Gordon Wilson, and there were few enough of those, there always seemed to be dozens of lesser senators with little enough to say and not a whole lot to do either. Expect the abolitionists to rehearse these arguments again and again over the summer months.

Expect, too, to hear the counter-argument forcefully made. Where was the Dáil when the Seanad failed to curtail the obvious onset of economic rot? Did not the Dáil snooze too? Why not reform the house? Why not vest it with real powers of accountability? Why not expand the franchise from the limited pool of county councillors and graduates?

And who ever said the seanadóirí were the aristocrats of Irish politics? That honour, surely, goes to the TDs who take the “family” seat of their husbands, fathers, brothers, uncles and cousins.

So this will be a noisy debate. Quite apart from winning the intellectual argument, the Government has a more basic task to execute first: to ensure polling takes place on the day of its choosing.

Kenny was careful yesterday to avoid going any further than saying he is aiming for early October. The calculation must be, however, that the target is Thursday, October 3rd. The following Thursday is too near budget day on October 15th.

Standing in the way of the Government is the danger that restive senators will move to frustrate its plan by exercising their right to delay the referendum Bill by 90 days. This is no small threat; the risk of course being that senators from Fine Gael and Labour might stray from the party line as an alternative to voting for their own extinction.

Only time will tell on the front. Still, moves are afoot in the Coalition to allow a three- or four-week Seanad debate just in case any of its members feel their acquiescence is being taken for granted.

If that’s the raw politics, there is also the more weighty theme of diminished parliamentary oversight. The simple fact that abolition would indeed amplify the power of the Dáil. Mindful of this argument and reluctant to expose itself to claims that the referendum is an opportunistic power grab, the Government has pledged procedural changes to toughen the scrutiny of new legislation and put more Dáil committees under the chairmanship of the opposition.

The Taoiseach has played his hand. It could be a long campaign.

Miriam Lord: new TDs shown the chamber but all the action is at the plinth

Miriam Lord: new TDs shown the chamber but all the action is at the plinth