European elections predictable in North for decades, but not this one 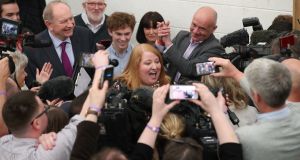 It was the best ever election for Alliance. In local elections in the 1970s they briefly rose to over 14 per cent but this time they reached the dizzy heights of 18.5 per cent, crashing the 100,000 first preference vote barrier for the first time. In the 2014 European poll it took 7.1 per cent of the vote.

Alliance leader Naomi Long, who won an MEP seat , said at the count centre in Magherafelt in Co Derry that Alliance was expecting to do well but not this well. She has claimed a couple of big unionist scalps in her career: DUP leader Peter Robinson’s when she took his East Belfast seat in 2010 and now that of the Ulster Unionist candidate Danny Kennedy.

She did a little bit of damage too to Sinn Fein too coming home in the fifth count with 170,370 votes. She was ahead of Ms Anderson, also returned on the fifth count, who won 152,436.5 votes.

This a worrying time for the UUP and its leader Robin Swann. Jim Nicholson held the European seat for the party for 40 years but now it has no representation, another reflection of the two decades of decline of the party that once dominated Northern Ireland politics. The UUP came sixth in the election, now the third ranked of the unionist parties behind the DUP and the Traditional Unionist Voice party led by Jim Allister who polled 62,021 votes. Nicholson won 83,438 first preferences in 2014, Kennedy dropped more than 30,000 votes this time.

Kennedy, a former UUP Northern Executive Minister, warned during the campaign that if the overall turnout was down that he would suffer. And so it turned out. The turnout of 45 per cent was down more than six per cent from 2014 and it’s reasonable to surmise the majority of those stay-aways were unionists.

This election demands much soul-searching and analysis from Swann and his senior advisors. How to stop the drift and perhaps ultimately a liaison with the DUP is a mighty challenge.

Kennedy also warned during the campaign that if two Remain candidates were returned that it would increase the prospects of a Border poll. That hardly stands up as Naomi Long and Alliance would reject any depiction of them as a quasi nationalist party.

And Sinn Fein is not in a position to claim any increase in support for a referendum on a united Ireland considering that between them Sinn Fein and the SDLP took 36 per cent of the vote, far short of a majority for unity.

Still, two Remainers in Europe from Northern Ireland does strengthen the argument of those still campaigning for a second Brexit referendum.

Nonetheless, the DUP – still opposing the backstop – will take solace from the result. In 2014 Sinn Fein’s Martina Anderson was elected on the first count with 159,813 votes and while she headed the poll this time on first preferences her vote was down by more than 30,000 votes compared to five years ago.

Moreover, in 2014 Anderson was more than 18,000 votes ahead of Dodds. This time she was just 1,960 votes in front and Dodds was elected ahead of Anderson on the third count.

The result may not be as dispiriting as the Sinn Fein performance in the locals and the Europeans south of the Border but it won’t have hugely cheered up Mary Lou McDonald who was at the count in Magherafelt. Some soul searching in Northern Ireland too for Sinn Fein leaders and advisers.

The election also was disappointing for the SDLP — without the Alliance surge its leader Colum Eastwood would have had a chance of the third seat.

The Greens will be reasonably content. In 2014 its candidate Ross Brown won 10,598 votes; this time new leader Clare Bailey increased the vote to 12,471.

As for the prospects of the talks Northern Ireland politicians already know that most Northern Ireland people want them back working in the Northern Executive and Assembly. But the problem now is that such is the uncertainty at Westminster which is in the throes of the contest for next British prime minister that the British government just won’t have the energy for quite some time to assist in restoring Stormont.