Dublin likely to back Barnier as head of European Commission 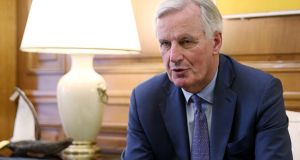 EU chief Brexit negotiator Michel Barnier: set for Government’s support in part because he has “done right by Ireland” during the Brexit negotiations. Photograph: Costas Baltas

The Government is likely to back Brexit chief negotiator Michel Barnier as the next head of the European Commission if, as expected, the bid of German Manfred Weber falters in the face of French opposition.

EU leaders meet in Brussels on Tuesday to discuss who should lead the commission and also the Council of EU leaders for the next five years, while the next head of the European Central Bank will also be discussed. No decisions are expected that evening.

Officially, the Government is backing Mr Weber “to the hilt”, says a spokesman, and the Taoiseach Leo Varadkar has repeatedly expressed his support. But privately senior officials acknowledge that his chances are falling away.

Mr Weber is the candidate of the European People’s Party, to which Fine Gael is attached, and under the system known as “spitzenkandidaten” the largest group in the European Parliament should nominate the incoming head of the European Commission.

However, it is the Council of EU leaders which actually makes the appointment – to be confirmed by a vote of the parliament – and French president Emmanuel Macron has made his opposition to Mr Weber clear.

Though the EPP remains the largest party in the new European Parliament, it suffered significant losses in the elections – a development which will damage Mr Weber, already considered a weak candidate to head the commission, when current president Jean Claude Juncker retires in the autumn.

The commission is the EU’s civil service and its policymaking engine. It is also charged with protecting the treaties.

Mr Macron has been lobbying EU leaders on appointments to the EU’s top jobs and dined in Paris last night with the Spanish prime minister, Pedro Sánchez.

Though other candidates, such as current competition commissioner Margrethe Vestager, the Dutch socialist Franz Timmermans or Belgian prime minister Charles Michel may be considered, Mr Macron is expected by many to back Mr Barnier, who is also French and a former EPP politician.

Sources in Dublin and Brussels say they expect the Government will back Mr Barnier, who has “done right by Ireland” during the Brexit negotiations, according to one person familiar with the issue, if Mr Weber’s candidature falters.

Two senior officials echoed this view, though another Brussels source said no decisions would be made on Tuesday. It is more likely, the source said, that it will become clear that Mr Weber will not be approved by EU leaders.

Documents published by the European Council show the leaders expect to consult with each other over the coming weeks before reaching a decision at the council meeting in Brussels on June 20th-21st.

Intense lobbying and jockeying for the senior EU roles is expected. The decision will be made by the leaders alone. Reports in Brussels said Mr Macron had been in contact with several EU leaders in recent days while, significantly, German chancellor Angela Merkel has remained silent on the issue since the election results, reports said.

The EPP insisted after the elections that Mr Weber would have to be appointed, saying it had won the elections, but this was immediately disputed by the Alde group in the new parliament, which is allied to Mr Macron’s party. No party had won a majority, Alde said.

Once the presidency of the commission has been decided, countries will begin to nominate their commissioners (there is one from each member state). The Irish commissioner, Phil Hogan, who holds the powerful agricultural portfolio, is expected to be reappointed for a second term.