Fianna Fáil leader Micheál Martin has ruled out the prospect of a "grand coalition" between his party and Fine Gael. Video: Ronan McGreevy 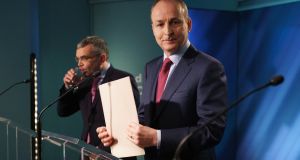 Fianna Fáil leader Micheál Martin has said his party will not form a “grand coalition” with Fine Gael after the general election.

Mr Martin said his party was only interested in creating a new government with other “centre” parties such as Labour and the Greens.

Asked if he would consider a confidence and supply agreement, similar to how his party supported the Fine Gael-led minority Government over the last four years, Mr Martin said Fianna Fáil was not interested in such an arrangement.

“That’s our position,” he said.

Taoiseach Leo Varadkar raised the possibility of a grand coalition or supporting a Fianna Fáil minority government during a leaders’ debate on Virgin Media on Wednesday night.

“If it is the case that the people vote in a certain way and the only way that we can form a stable government is for Fianna Fáil and Fine Gael to work together, I am willing to do that.”

Mr Martin did not reply to his point during the debate, moderated by Pat Kenny, and declined to answer questions on the subject when asked by reporters as he left the TV station after the debate.

Speaking to reporters in Dublin on Thursday, Mr Martin said: “People want change, that’s the message we’re receiving, they want Fine Gael out of office and we’ve made it very clear we want to go into government with other centre parties, clearly Labour and the Greens are the ones we’d be interested going into government with, but that’s to be determined by the people.

“Fine Gael need to come out of government, they’ve been there too long, they haven’t delivered on key issues such as housing, health and the impact of cost of living on many people.

Mr Varadkar was also asked about the issue on Thursday. He told reporters at Castleknock Community College in Dublin that his preference would be to lead the next government with smaller parties such as Labour and the Greens or Independent TDs.

“But if the numbers fall a certain way and the only way to form a stable government is for Fianna Fáil and Fine Gael to cooperate in coming together, I think that’s the responsible thing to do for the country,” he said.

“We’ve seen in Spain and Israel, where politicians have plunged their country into a second election and third elections, and the results don’t change very much.”

Mr Martin said Fine Gael had been demonising Fianna Fáil “as the worst possible incarnation for the last six months and then, ’hey presto, we’ll go into government with Fianna Fáil’. That doesn’t make any sense to the public. That kind of Jekyll and Hyde behaviour doesn’t have any credibility.

“You can’t have people like Colm Brophy and their ilk trotting out statements about how dastardly Micheál Martin is at the drop of a hat. That doesn’t resonate with people.”

Mr Martin was asked about Mr Varadkar’s admission during the debate that he had smoked cannabis in the past.

Writing in Thursday’s Irish Times, former Fine Gael leader Michael Noonan accused Mr Martin of trying to portray his party as the “most innocent bystanders in history” when it came to the economic crash.

Mr Noonan described the last Fianna Fáil government, as the “worst government in Irish history” and suggested it had brought the country to the “brink of disaster and bankruptcy”.

Mr Martin said that prior to the last financial crash, Fine Gael was vowing to deliver an additional €4 billion in expenditure.

“Equally, to be fair to him, he (Michael Noonan) said the four year plan that Brian Lenihan had produced was the correct one in terms of the global economic meltdown which had a huge impact on Ireland, ” he said.

“We’ve acknowledged that in terms of over-expenditure and reduced taxation. That shouldn’t have happened. We have learned lessons from that. I’m not sure everybody else has either.”

Meanwhile, Fianna Fáil has said that economists accusing it of engaging in auction politics are “wrong” and that all of its spending promises have been “carefully costed”.

Colm McCarthy, who has advised a number of governments on reducing public expenditure, said the current rash of election promises was “utterly insane”.

Parties have been making pledges in the last week on postponing an increase in the pension age, on housing and fixing the health services.

Mr Byrne said the party’s manifesto is “carefully costed” and is “totally different from what happened before and I think everyone needs to learn the lessons of the economic crisis”.

“To me, the biggest thing to come out of the economic crisis is that people expect politicians to do what they say, to mean what they say and to follow through,” he said, adding that economists accusing the party of auction politics were “absolutely wrong”.

Fianna Fáil announced its education policy on Thursday morning and promised a freeze in student fees, to reduce pupil teacher ratios and to address teacher pay inequality. The party also said it will invest €100 million a year in higher education.