Order for polling day on Friday, February 26th is signed by Alan Kelly 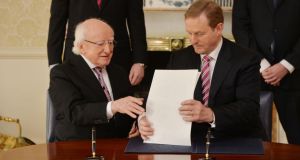 Taoiseach Enda Kenny with President Michael D Higgins at Áras an Uachtaráin where they signed the dissolution of the 31st Dail. Photograph: Alan Betson / The Irish Times 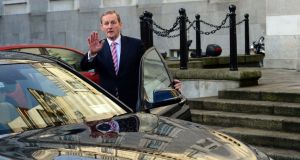 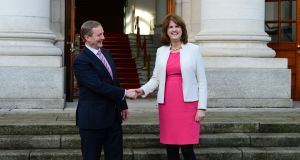 The order for the polling day to be held on Friday, February 26th has been signed by Minister for the Environment Alan Kelly.

Mr Kenny arrived at the Áras at 10.26 am and signed the visitors book in the hallway before having a private conversation with Mr Higgins in the President’s drawing room.

In a brief ceremony lasting less than two minutes Mr Kenny and Mr Higgins strode briskly into the State reception room, nodding briefly to a posse of photographers. They sat at a mahogany table where they signed the proclamation formally dissolving the Dáil. Afterwards the acting Taoiseach was escorted to his car by Mr Higgins and his wife Sabina.

Mr Kenny did not respond to questions from the media as to how he felt. He moved swiftly to his car and was driven away.

Mr Kenny earlier announced his intention to seek the dissolution of the Dáil in a brief Oireachtas address.

“To those members of the house who are not seeking re-election I wish every success and happiness in the future. I wish all other members well in their endeavours to return to the House,” he said.

Quoting a line in Irish from poet Antoine Ó Raifteiri, Mr Kenny said “Brigid’s day has passed. Now the coming of Spring, I must raise my sail.”

The polling stations will be open to voters from 7am to 10pm. Voters not on the electoral register must apply by Tuesday February 9th to vote, while candidates must register to stand in the election by February 11th.

I am seeking a dissolution of Dáil Éireann today with the election to be held on February 26th.https://t.co/R5JnwC3XFB

The Taoiseach and Tánaiste Joan Burton posed for photographs outside Government Buildings before the Mr Kenny, waved off by the Labour leader, got into a BMW car, part of a motorcade, and travelled to the Áras.

Opposition figures reacted angrily to Mr Kenny’s brief announcement in the Dáil, with Fianna Fáil leader Micheál Martin complaining that there was no opportunity to pay tribute to retiring members and Sinn Féin’s Caoimhghin Ó Caolain pronouncing it “a pathetic end to a pathetic Dáil”.

Most of the Cabinet was present and a number of Ministers of State. There were just seven members of the Opposition in the House and five Labour backbenchers.

Mr Martin said the dissolution of the Dáil highlighted the arrogance of the outgoing Government. He said it was a disrespectful way to end the term.

Mr Martin said it was his intention to pay tribute to three members who were retiring from Fianna Fáil. Leas Ceann Comhairle Micheal Kitt, former Ceann Comhairle Seamus Kirk and John Browne had 120 years service to the Dáil between them, he said.

Ms Burton said Mr Kenny had dissolved the Dáil in the most appropriate way.

“I do recall people on previous occasions have gone to see the president early on a Sunday morning and on another occasion when it was an early night on those days for people when I think it was 9.30 and Bertie Ahern dropped into the Dáil at the time and made a surprise statement,” she said. “The Taoiseach has done it well.”

Ms Burton said she was confident she would return as Tánaiste when the 32nd Dáil begins in March.

As he arrived at the Áras, Mr Kenny insisted it was not goodbye for Fine Gael and Labour.

Ms Burton said the two parties had worked well together, admitting they had not got everything right over the past five years.

“It has been a very united Government facing into the difficulties and the dangers that beset the country when we entered into office,” she said.

“Fianna Fáil left us an economy that crashed, construction industry that had crashed and banks that had crashed. 300,000 people had lost their jobs and many more had emigrated.We have now got 135,000 new jobs and infact those numbers are climbing all of the time.”

Mr Kenny is to hit the campaign trail quickly and will visit Longford Westmeath, where Fine Gael is represented by James Bannon and Gabrielle McFadden.

His announcement that the election will be held on Friday February 26th is in keeping with his commitment to complete a full term. He had previously said he had received a mandate for a five year term. The last election was held on February 25th 2011 and he has fulfilled his pledge on the term, to the day.

While the Dáil has been dissolved the Government remains in place until March 10th when a new government is expected to be formed.

The outgoing Fine Gael/Labour Coalition had the largest majority in the history of the State.

Fine Gael was returned to the Dáil in 2011 with 76 seats while Coalition partners Labour had a record 37. Fianna Fáil, severely punished in the wake of the economic collapse, dropped from 77 seats in 2007 to just 20. Sinn Fein more than doubled its representation from six to 14.

The ill-fated United Left Alliance (ULA) returned five TDs and there were 14 Independents.

Since then new political parties have formed. The Lucinda Creighton-led Renua Ireland party and the Social Democrats, led by Catherine Murphy, Stephen Donnelly and Roisin Shortall, will contest the election. With prominent members including Shane Ross, the Independent Alliance will also contest.

The last Irish Times Ipsos MRBI opinion poll saw Fine Gael at 30 per cent and Labour at 7 per cent.

Fianna Fáil was at 19 per cent, Sinn Féin at 21 per cent and Independents/Others at 23 per cent.