Party leaders preparing for final TV debate, to be aired on RTÉ this Tuesday evening 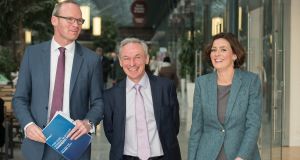 The final week of campaigning in the general election will see the political parties and their leaders give greater focus to a number of key constituencies, as well as ensuring supporters turn out to vote.

All leaders will also be preparing for the final televised debate on RTÉ television tomorrow night, which is seen as crucial.

It will also see Fine Gael, in particular, implement vote management in 20 of the 40 constituencies to maximise its vote through letter and leaflet drops, direct canvasses and social-media messages. Some Ministers will also be sent to neighbouring constituencies to shore up the Fine Gael vote.

One of Fine Gael’s main aims is to win two seats in Dublin Bay South, with sitting TD Eoghan Murphy splitting some of his vote in an attempt to ensure Kate O’Connell takes a seat.

Mr Murphy is to ask Fine Gael voters in Terenure and Rathgar to give Ms O’Connell a first preference. Brian Hayes, the party’s national director of elections, said it was not the intention to target former Fine Gael TD Lucinda Creighton.

Sources said a number of Fine Gael ministers complained about the continued focus on the message “let’s keep the recovery going”. This jarred with people who have yet to feel any recovery.

Local Fine Gael organisers have also been told to encourage voters to transfer to Labour, in line with the vote transfer pact agreed between the Coalition partners. But it is now thought unlikely that Taoiseach Enda Kenny and Tánaiste Joan Burton will hold a joint publicity event this week.

Fianna Fáil sources said Micheál Martin will travel to constituencies where the party believes it has a chance of gaining a seat. These include Waterford, Dublin South- West and Dublin South-Central where Mary Butler, John Lahart and Catherine Ardagh are the respective candidates.

“We have to go with our noses,” said one, adding that it will be “steady as she goes” otherwise for the rest of the campaign. Mr Martin is expected to continue with his message that the Government has overseen an unfair recovery.

“We will be saying that if progressive voters truly want to protect and extend the hard-won gains of recent years, they need to vote Labour – nobody else,” said one Labour figure.

Ms Burton will also spend the final few days of campaigning in many of the Dublin constituencies where Labour has a seat and will hope to hang on in the event of a poor national performance.

Sinn Féin sources say the party’s main focus in the coming days will be to get out the vote in areas where the party enjoys strong support. It has traditionally performed below its opinion poll ratings on election day but party organisers believe they are better prepared at this election.

They say they have built up a database of Sinn Féin voters over past elections.