Eddie Hobbs under no pressure to stand for Renua in election 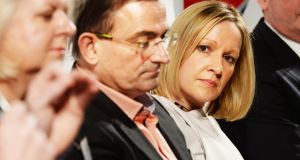 Eddie Hobbs with Lucinda Creighton at the launch of Renua. The controversy over whether he will run as a candidate is not an issue for the party. Photograph: Cyril Byrne

Renua Ireland has said the controversy over whether Eddie Hobbs will run as a candidate is not an issue for the party.

There has been criticism from commentators that Mr Hobbs’s unwillingness to state an intention to stand would act as a drag for support.

However, leader Lucinda Creighton said yesterday it might be an issue for the media but it was not for Renua.

“[Eddie Hobbs] will decide with his family. Meanwhile he is doing Trojan work building this organisation nationwide,” she said. “He has really rolled up his sleeves and is working around the clock to build a viable alternative for Irish citizens to vote for at the next election – quite unlike many of his armchair critics.”

She was supported by deputy leader Billy Timmins, who said it was understandable that the media would be putting a lot of pressure on a high-profile figure like the financial consultant.

Meanwhile, a group of independent TDs and councillors who want to collaborate electorally have scheduled a meeting for prospective candidates in Tullamore on March 28th.

Yesterday one of its leading members, Independent TD Finian McGrath, said they expected as many as 80 independent councillors would attend the meeting but that the maximum number the grouping would pick was 40.

A third possible coalition or grouping might emerge from TDs in the Dáil early in the summer.

A number of unions involved in the anti-water charge protests have organised a two-day conference in early May and have involved representatives of Sinn Féin, the smaller left-wing parties, community groups, left-wing TDs and councillors and other interested groups.

The meeting will be presented with a draft document setting out broad principles.