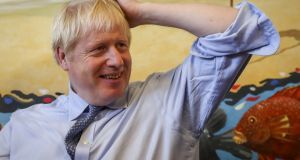 The Government has refused to engage in discussions with the UK about no-deal preparations, including on how to avoid checks on the Border, in recent contacts with London, The Irish Times understands.

The new British government wants to talk to Dublin about managing a no-deal exit, but Irish Ministers and officials have declined, according to three people briefed on the contents of recent exchanges.

4 Fintan O’Toole: The Covid-19 pandemic should be the last hurrah for Irish stoicism

5 Laura Whitmore: ‘I’ve had enough of being trivialised and gossiped about’

6 Coronavirus: ‘Great sign’ as number of ICU patients falls below 100 for first time in two months

7 Bank of Ireland closure brings out true grit in Abbeyfeale

8 Stuff happens: Why you have so much household clutter – and how to get rid of it

9 Award to woman knocked down crossing Dublin street increased to €372,000

11 The first eight days: how the coronavirus pandemic struck Ireland

14 David McWilliams: This St Patrick’s Day, Ireland should do a vaccine deal with the US

16 Colin Farrell: ‘After 20 years of drinking the way I drank, the sober world is pretty scary’

20 Ross O’Carroll-Kelly: ‘We’d be a lot better off if we’d remained port of Britain’

22 Murmuration of starlings: How our stunning front-page photograph was taken

23 Jennifer O’Connell: We did not need Pontins to teach us about anti-Traveller discrimination

24 Can Davy’s clients stay silent as board goes into conclave?

29 Air fryers: How good are they, really, and what can you cook in them?

31 The Guardian apologises to Mairia Cahill over Roy Greenslade article

32 Father of the Cyborgs: The Irish neurologist who hacked his own brain

35 Ian O’Riordan: You can’t put in what God left out (and other coaching secrets)

39 Meal Box Review: There’s a touch of magic to this food