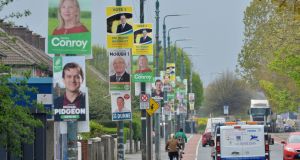 A proliferation of Local and European Election candidate posters on Parnell Road, alongside the Grand Canal, were pictured on Wednesday, the permitted time for putting up posters. Photograph: Alan Betson /The Irish Times

Dublin City Council is investigating a number of cases where politicians put up election posters on Tuesday, a day ahead of the permitted time.

Candidates found to have put posters up early can face a €150 fine per poster.

Posters can only be erected 30 days before polling day, which is May 24th, for both the local and European elections. This means candidates were permitted to put up posters after midnight on Tuesday.

From Tuesday afternoon, several politicians in Dublin had jumped the gun and had begun to put up election posters on poles a day early.

“These complaints were investigated and the city council is pursuing the issuing of fines in respect of breaches of the Litter Pollution Act, following on from these investigations,” a spokeswoman said.

Posters must also be removed within seven days after the election, or candidates are liable to face a similar €150 fine. There are several restrictions around election postering, and they cannot be placed too close to the ground, or on ESB electricity poles for safety reasons.

Mr Flanagan was previously a Fine Gael TD, before he left the party to join Renua, and then lost his seat in the 2016 general election.

The posters had been put up a day early as a “test run” for members of his campaign team who had not put up posters previously, he said. After a warning from DCC litter wardens he removed the six posters, he said.

“I was actually then at a disadvantage, as I took them down, and then everyone else went out and put there’s up,” he said.

“I think people like to go out early, as it’s safer,” he said, adding there was “huge safety issues” climbing up poles over several other posters.

Allowing posters from midnight was “to the advantage of the big party machines” who could hire contractors to work through the night, rather than having an afternoon starting time, Mr O’Farrell said.

In recent days, Dalkey Tidy Town committee sent an email to candidates warning posters put up in the south Co Dublin suburb would be “removed and destroyed.”

However, a committee member later said the message had been “misunderstood” and the local group had no plans to illegally take down and destroy candidates’ posters.