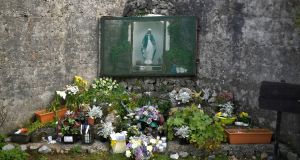 A shrine dedicated to children who died at the Tuam mother and baby home. Taoiseach Leo Varadkar said a report by a commission investigating the homes made for ‘gruesome reading’. Photograph: Clodagh Kilcoyne/Reuters.

The fifth interim report into mother and baby homes makes for “gruesome reading” and “gives us a further insight into a very dark part of our history”, Taoiseach Leo Varadkar has said.

He added that “as a society we inherit a deep shame for what was done back then” and said society had to atone for what happened in those homes.

Mr Varadkar was speaking in the Dáil following the publication of the report by the Mother and Baby Homes Commission of Investigation, which found that more than 900 children died at the Bessborough home in Cork. However, investigators could not determine where most of the babies had been buried.

The report also stated that the burial of 800 children in the Tuam home in Galway in a decommissioned sewage tank did not provide for the dignified burial of human remains.

The Taoiseach said it was a time when women were badly treated by the State, the Catholic Church and their own families and when infant mortality was very high with few vaccines, no antibiotics and very poor public health.

But he insisted that those facts did not excuse “the indignity in the way in which these babies were treated in death”.

“We must now endeavour to learn, to atone and to put things right,” he said.

Sinn Féin leader Mary Lou McDonald called for Minister for Children Katherine Zappone to discuss the report in the Dáil and to set a timeline for the excavation of the Tuam site.

The Taoiseach said the Minister would do so after the Easter recess.

Independent TD Catherine Connolly urged Mr Varadkar to stop treating the issue as if it was in the past. She said the commission was surprised at the lack of knowledge of Galway County Council which owned the Tuam home and the Bon Secours sisters, who ran it, about the burials there.

She said the commission described as “in many respects, speculative, inaccurate and misleading” an affidavit sworn by the Sacred Heart of Jesus and Mary sisters. That congregation ran three homes including Bessborough.

The Galway TD said “this is not in the past. This is the present”.

The work was ongoing and the commission expected to issue a final report next spring, he said, adding that the interim report is “not the final say on this”.