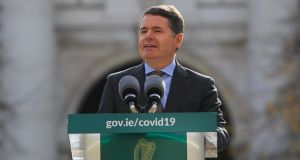 Minister for Finance Paschal Donohoe: ‘he had fulfilled his responsibilities which was how 89,000 mortgage and loan holders got payment breaks.’ Photograph: Gareth Chaney/Collins

Minister for Finance Paschal Donohoe has rejected claims that he “failed miserably” to get an extension of mortgage payment breaks for homeowners and businesses in difficulty because of the Covid-19 pandemic.

Sinn Féin finance spokesman Pearse Doherty made the claim as he also alleged that Fine Gael was “too close to big finance and banks”.

Mr Doherty said the meeting Mr Donohoe and other Ministers had with the banks on Monday about mortgage break extensions amounted to a “nice wee friendly chat” where the banks “told you that they were going to do what they always did, that they will deal with individuals on an individual basis”.

Mr Doherty told Mr Donohoe: “You failed miserably because there will be no extension of payment breaks”.

He said he had fulfilled his responsibilities which was how 89,000 mortgage and loan holders got payment breaks. Mr Donohoe also pointed to the Central Bank who he said had been clear that sufficient funding is available to banks to enable them to make arrangements that could work for families and businesses.

From Wednesday no new applications will be allowed for mortgage payment breaks or for other loans and the banks will instead look at individual loans on a case-by-case basis.

Mr Doherty said banks in other EU countries including Germany and Spain offered longer payment breaks. But he told Mr Donohoe “you did nothing to protect these individuals who will now have a negative credit rating from the next couple of days onwards”.

Mr Donohoe however accused Mr Doherty of a “typical Sinn Féin response” by making such comparisons with only “part of the truth”.

He said it was unfair to make comparisons with other EU states because there were limits on their schemes about eligibility and the level of support offered, unlike Ireland.

Mr Doherty made reference to the resignation from the Seanad of former minister of state for finance Michael D’Arcy to move to the private financial sector as chief executive of the Irish Association of Investment Managers.

“You had an opportunity to do the right thing Minister but you and Fine Gael have done the wrong thing time and again because the problem here is – and we see it with Michael D’Arcy and we see it with Brian Hayes – the party is too close to big finance and banks.”

Mr Hayes, a former Fine Gael minister of state and MEP is chief executive of the Banking & Payments Federation of Ireland.

Mr Donohoe insisted however that Fine Gael is the party “that has looked at all times to do the right thing” by people experiencing difficulties during the Covid-19 crisis.

The Government introduced the payment breaks early on which helped almost 90,000 families. Mr Donohoe added that he was aware of the pressure and fear people faced which was why measures like the employment wage subsidy scheme were continuing.

He said Ireland moved quickly to introduce payment breaks which have helped tens of thousands of families and businesses.