Former junior minister to become non-aligned member of the Government 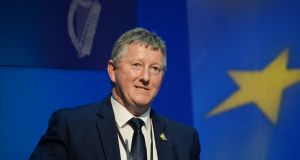 Independent TD Sean Canney has left the Independent Alliance group of TDs but will remain on the Government benches and will support the coalition.

In a statement this morning Mr Canney said he would continue to support the Government on issues of confidence and budgetary matters.

Mr Canney has been considering his position within the group since losing a row over the allocation of a junior ministerial portfolio.

The other members had been told that Mr Canney would release a statement today. The other Independent Alliance members include Shane Ross, Finian McGrath, John Halligan and Kevin Boxer Moran.

The Galway East TD still has the position of assistant Government whip, which comes with an extra €15,000 allowance on top of a basic €90,000 TD’s salary.

He says he will continue to support the Government on the same basis as other Independent TDs Denis Naughten and Katherine Zappone.

Mr Moran and Mr Canney made an agreement two years ago to rotate the position of Minister of State for the Office of Public Works between them.

When the Fine Gael-led minority administration took office in May 2016, they decided with a coin toss that Mr Canney should take the job first for one year. Mr Moran took over last June.

Mr Canney maintained the ministerial post should revert back to him, while Mr Moran, a Longford-Westmeath deputy, believed the agreement was that Mr Canney would have the job for one year only.

The issue was settled in Mr Moran’s favour last month.

He told RTÉ’s Today with Sean O’Rourke show of his disappointment that the original deal to rotate the junior ministry position with Mr Moran had not been maintained.

“Rotating means rotating. The deal was that the position was to be rotated.”

Mr Canney said that when he shakes hands on a deal he expects it to be carried through.

When asked if the deal had been put in writing, he acknowledged that it had not. “I lectured in contract law and I didn’t follow my own advice.”

In a statement Mr Canney thanked “all who have contacted me over the last number of weeks offering their support. I want again to emphasise that it is business as usual for me as I continue to serve the constituents of Galway East as an Independent TD.”