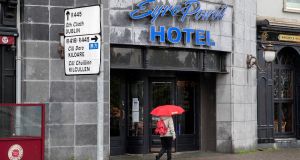 Direct provision will be ended “over the lifetime of this Government”, according to Minister for Children Roderic O’Gorman who has warned that it will not occur quickly.

He said the White Paper the Government will publish by the end of the year will set out how that process will work but he insisted that “I have been very clear that this is not going to happen swiftly”.

The Minister also said the transfer of responsibilities for direct provision and other policy areas from the Department of Justice would take place “in a matter of weeks”. Officials are examining relevant functions, legislation, staffing and funding and while he did not have a specific date he hoped all functions would be transferred to his department “by the end of the month”.

When the new Cabinet was announced in June it was decided that responsibility for direct provision would be among a number of policy areas to be transferred from the department of Minister for Justice Helen McEntee to the Department of Children.

She had said direct provision would be abolished “as soon as possible” but it could not be done before the end of the year as many campaigners had called for.

Confirming that it would be done over the lifetime of the Government Mr O’Gorman said the current system will be replaced “with a new method of accommodation for those in the international protection process, one which properly recognises their dignity but one which is not focused on private provision, which is one of the key issues with direct provision”.

The Minister was responding during Dáil question time to Sinn Féin’s Pa Daly who said the last few residents in the Cahirciveen, Co Kerry direct provision centre had been transferred from the former hotel in the wake of the controversy over Covid-19 cases.

But Mr Daly said the whole area of direct provision was thrown into focus again with the outbreaks in Kildare.

“This will continue to happen as long as the State continues to use accommodation centres which are clearly not fit for purpose,” he said.

Mr Daly added that regulations on direct provision had been signed in August last year which “almost unbelievably, will not have legal force until January of next year”. He questioned the need for a new White Paper when the regulations had been made.

But the Minister said a White Paper was needed because direct provision “is an overarching issue” across a wide range of areas.

The programme for government did not just look at accommodation but “the entire international protection process and how that might be speeded up”; conditions residents are living in; the provision of vulnerability assessments; and inspection, “which is very relevant to the regulations on what direct provision accommodation should look like”.