Government will do what it can on statutory redundancy for ex-employees, says Taoiseach 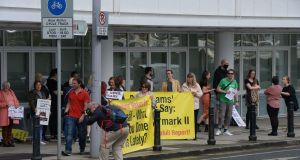 Debenhams has treated its workers in a “very shabby way” and the Government will have to re-examine the law that allows companies use devices to deprive workers of their entitlements, the Taoiseach has said.

Micheál Martin said the State “will have to do its bit to provide, within the legal framework, what it can in terms of statutory redundancy” but the behaviour of the company was “unacceptable”.

Debenhams retail Ireland, the Irish arm of the company, had operated 11 stores in the State and employed 950 people directly and a further 500 worked at concession stands in its shops. The company was placed in liquidation in April and employees have protested since in a bid to win redundancy pay.

Mr Martin agreed with People Before Profit TD Richard Boyd Barrett that the company had availed of the Companies Act framework on insolvencies and winding-up “to leave the workers extremely short”.

Mr Boyd Barrett said the company had treated workers in the “most despicable manner” and “even though there are probably tens of millions of euro worth of stock in the stores in Henry Street, Blackrock, Cork, Tallaght and Blanchardstown, apparently, this is a company with no assets”.

The Dún Laoghaire TD said Debenhams must not be allowed to take those assets out of the stores which “should be liquidated to the benefit of the workers to ensure a just settlement for them”.

Mr Boyd Barrett said everything possible should be done to ensure that Debenhams “does not get away with manipulating the law as it stands to siphon off these assets”.

Answering his first leaders’ questions in the Dáil as Taoiseach Mr Martin said, however, that he could not raise expectations they could not deliver on about “interfering in the liquidation process or making interventions that could not be legally sustained”.

He said “the legislation will have to be re-examined in terms of the devices that companies may use, separating out assets from trading income in particular, to deprive workers of their just entitlements in terms of redundancy”.

He warned that reform of any law “can have unintended consequences”. It is included in the programme for government and he pledged that work would begin on examining overall company law to reduce “the capacity of companies to deny workers their entitlements in terms of redundancy and workers’ rights generally when a company is winding up”.