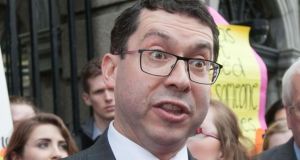 Independent Senator Ronan Mullen questioned how it could be acceptable for the HSE to fund agencies in this way without full accountability for the taxpayer and said there was a need for complete transparency. Photograph: Collins

The HSE has been criticised in the Seanad for allocating more than €200,000 this year to a charity which has not yet provided audited accounts for 2019.

Senators heard that the advocacy group also received €326,000 from the HSE in 2019 and €180,000 last year but has yet to issue externally audited accounts for the past two years.

Independent Senator Ronan Mullen did not name the charity when he raised the issue in the Seanad.

But he questioned how it could be acceptable for the HSE to fund agencies in this way without full accountability for the taxpayer and said there was a need for complete transparency.

Calling for the law to be changed to ensure proper accounting compliance is a condition of getting State funding, Mr Mullen said “one reason we give money to voluntary and charitable groups is so they can put the proper accounting practices in place”.

Controversies about a number of charities have been highlighted in recent years on issues around governance, accounting practices and excessive salaries.

Mr Mullen said “we must not forget the lessons learned” from those charities.

The Galway Senator pointed to recent warnings from Charities Regulator Helen Martin that many charities are “rushing to appoint highly-paid CEOs before they have engaged in any proper fundraising at all”.

In one case she mentioned a charity wanted to appoint a chief executive with a €150,000 salary before any money had been raised by the organisation.

“Often in these cases the CEO is the only full-time employee. Groups seem to think about employing highly paid staff before they have even mapped out their governance or focus,” Mr Mullen said.

Ms Martin had called for legislation on the regulation of charities to be amended to require full disclosure of salaries in accounts and Mr Mullen expressed surprise that such a provision is not already in place.

Seanad leader Senator Regina Doherty acknowledged that “any body that receives State funding to provide a service on behalf of the State or in conjunction with the State absolutely has responsibilities not just to the Charities Regulator but to the agency that gives it the money”.

Ms Doherty said; “I know the HSE is particularly good at this so it is a bit funny that there is an organisation that has received money two years in a row without returning accounts”.

She added; “I have to assume the HSE is on top of it but I might just send it a little note to get the information, if the Senator will give me the details of the charity later.”