Saudi Arabia repatriating thousands of migrants back to Ethiopia 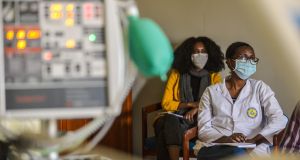 Saudi Arabia is stepping up the deportation of thousands of Ethiopians, including some who are suspected of suffering from Covid-19, an act that some migrant advocates have described as reckless and inhumane.

Over the past 10 days, up to two flights a day carrying Ethiopian migrants have landed at Addis Ababa international airport, before returning to Saudi Arabia loaded with cattle exports.

A total of 2,968 migrants were returned in the first 10 days of April, according to one UN official who spoke on condition of anonymity because they were not authorised to speak on the matter.

“This is simply not the moment for mass deportations from a public health perspective,” said Catherine Sozi, UN humanitarian co-ordinator for Ethiopia. “These mass deportations, without any pre-departure medical screening, are likely to exacerbate the spread of Covid-19 to the region and beyond.”

A senior Saudi official said the kingdom was not conducting forced repatriations but was co-ordinating with countries if migrants wanted to return home.

“We are co-operating with individual countries to say do you want your people back, are you able to receive them, what can we help do to enable them to come back,” the official said. “And where countries have responded positively, we are organising flights, some of it we pay for to send them home, but we are not forcing people.”

Foreign workers account for about a third of Saudi Arabia’s 30 million population and more than 80 per cent of the kingdom’s private-sector workforce. Riyadh, the capital of Saudi Arabia, has imposed a strict lockdown to contain Covid-19 that has shuttered many areas of the economy, but businesses are eligible for government support to pay salaries.

“I don’t think we will see in Saudi Arabia a significant number [of foreign workers] as a percentage going out,” the Saudi official said. “If we are to look at the big picture in the next three months, I would not imagine anything more than 10 per cent going out because of flight capacity.”

Ms Sozi said the UN was calling for a temporary suspension of the deportations to give Ethiopian authorities time to plan properly for the migrants’ safe repatriation. Ethiopia could not be expected to cope with the sheer number of deportations, she said.

“If you keep receiving 600-700 migrants a day and they all have to go into quarantine, something will break,” said one western official in Addis Ababa. “The fear is that they will dump these people here and that the conditions in the quarantine centres will guarantee the spread of the disease.”

Ethiopia has requested that the deportations stop during the coronavirus crisis, and on Saturday denied landing rights to a Saudi aircraft, according to a person familiar with the deportations. The Ethiopian foreign ministry could not be contacted for comment.

The migrants are being taken to four quarantine centres in Addis Ababa in converted university buildings and schools. But officials who have been processing the migrants warn that conditions are becoming dangerously overcrowded and that the situation is reaching crisis point.

Some have tested positive for Covid-19 and others with symptoms of the disease have been put into separate isolation facilities. On one recent flight with 308 passengers, staff working for the World Health Organisation identified seven people with suspected Covid-19 symptoms.

“Ethiopia’s ability to respond is stretched to the limit,” said one person with direct knowledge of the deportations. “But everybody is scared of talking about what’s going on. No one wants to be on the wrong side of Saudi Arabia.”

Saudi Arabia is an important investor in Ethiopia and has provided the government of prime minister Abiy Ahmed with help to alleviate the country’s chronic shortage of foreign exchange.

Saudi Arabia began repatriating Ethiopian migrants from mid-2018, according to UN officials. At the time, there were as many as 500,000 Ethiopians in the kingdom working in the construction industry, as maids or as animal herders, they said.

As many as 300,000 Ethiopians have been repatriated during the past two years. Nearly two million foreign workers have left the kingdom since the beginning of 2017 as Riyadh has implemented labour reforms and imposed tariffs on expatriates and their dependants.

But the Ethiopian government recently asked for a moratorium on deportations to stop the spread of coronavirus, UN officials said. Saudi Arabia had, if anything, stepped up repatriations in recent days, they added.

An estimated 30,000 Ethiopian migrants trying to reach Saudi Arabia are also trapped in Yemen, according to migrant officials. Some are being pushed further north towards Saudi Arabia while others are being moved south into Djibouti, which borders Ethiopia, they said.