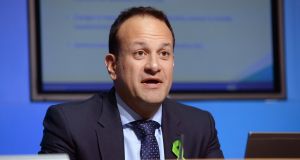 Minister for Social Protection Leo Varadkar: completed review will be presented to the Oireachtas no later than September 2018. Photograph: Dara Mac Dónaill

Ireland has one of the most progressive legislative frameworks for affirming the rights of people in terms of gender recognition, according to Minister for Social Protection Leo Varadkar.

He announced that a review would commence by September of the 2015 Gender Recognition Act as required by the legislation.

Mr Varadkar told the Seanad that the completed review will be presented to the Oireachtas no later than September 2018. It will include the position of people who are non-binary (do not identify as exclusively male or female) and the position of 16 and 17-year-olds and younger children.

Mr Varadkar was speaking during a debate of the Gender Recognition (Amendment) Bill introduced by Sinn Féin TD Fintan Warfield, which the Government will not oppose at second stage.

The current Act allows transgender people over the age of 18 to self-declare their own gender identity. Those aged 16-17 could also apply to be legally recognised but the process was more difficult.

Mr Warfield said the Bill “seeks to extend the right to self-determination to trans people aged 16 and 17 years” to self-declare their gender identity. “For the first time this legislation will also open a legal pathway, currently unavailable to trans people under the age of 16 years”.

The Sinn Féin Senator said that with this legislation “the State will truly recognise the existence of trans young people, acknowledging that one does not just turn trans on turning 16 years of age”.

Independent Senator David Norris, who co-sponsored the Bill, praised Sinn Féin for being “extremely good in the area of sexual reform in particular”. Mr Norris described the legislation as progressive and forward looking.

He said the House should applaud the recognition for the first time of providing a gender recognition certificate to people who do not identify themselves as either male or female.

Fine Gael Senator Ray Butler said trans people “are among the most vulnerable members of Irish society and experience high levels of stigmatisation and marginalisation” and he said the lack of State recognition in other areas of trans identity was a major contributory factor to that marginalisation.

Green party Senator Grace O’Sullivan, who also co-sponsored the Bill, said the passage of the 2015 Act by the last government was “a major step forward in the modernisation of Ireland and the creation of a fairer and more pluralistic society”. She said that one of the central principles of the Bill was that those affected by the current legislation, mainly young transgender people and non-binary people, “are best placed to decide what is good for them”.

Fianna Fáil Seanad leader Catherine Ardagh said the current requirement for young people to get a medical report to apply for gender recognition was an onerous condition, and they might “just want their gender to be recognised on paper”.

Independent Senator Collette Kelleher quoted correspondence she had received from one person who said: “Bills like this mean that one day when I come out to my parents, even if they don’t get it or don’t understand it, they will still accept it, accept me. Bills like this allow us just to live.”