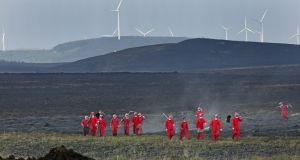 A state of emergency should be declared because of the threat from gorse fires in the west of Ireland to people’s lives and to wildlife and habitats, the Dáil has heard.

Independent Galway West TD Catherine Connolly said more than 1,500 hectares of forestry and 2,000 hectares of bogland had been destroyed in an area “five times the size of Phoenix Park”.

Ms Connolly said the Cloosh Valley forest in Co Galway is the largest forest in Ireland and already 25 per cent of it had been destroyed. She told the Dáil the fire had would cost “multimillions” in the loss of productive timber and its replacement, “not to mention the loss of wildlife, the damage to the environment, the serious threat to people’s houses and livelihoods”.

She criticised the Government’s response to the fires and asked what its plans were to deal with a forest fire that was “raging from the Oughterard side of Galway over to Inverin on the other side”.

Ms Connolly asked if any Minister had inspected the area and talked to the emergency services on the ground.

Minister of State for the OPW Seán Canney insisted the Government took a “proactive response to forest fires when they occur”. He said “all the emergency services are out there dealing with it” and all the warnings had been issued. The Minister added that emergency responses were an issue for the Department of Environment but there were a number of departments involved.

Mr Canney paid tribute to the work of the emergency services and the co-operation of other State agencies including the Army, the Air Corps and Coillte, in keeping the fires under control and attempting to extinguish them.

Fianna Fáil Sligo-Leitrim TD Marc MacSharry asked if the Government would help fund the replacement of 500m of the Sligo Way, a 34km walk from Dromahair, Co Leitrim to Coolaney in Co Sligo which was destroyed in recent weeks in the fire that destroyed 4,000 acres around Killery Mountain.

Mr MacSharry said the Sligo Camino was a significant walking event, with 1,000 participants, that took place in July, and for the event to go ahead the 500 metres would have to be replaced urgently. He suggested that some funds could be diverted for this purpose from the minor works scheme for coastal erosion and flood damage.

Mr Canney said, however, that funding for flood works was for flood works and repairs to forest trails did not qualify. He said the area affected was on privately owned commonage.