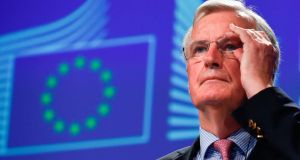 EU Brexit negotiator Michel Barnier: delights in pointing out how difficult it will be to disentangle the UK from the EU. Photograph: John Thys/AFP/Getty 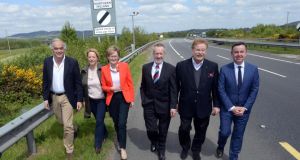 Few European politicians have ever been as important to Ireland as Michel Barnier, a silver-haired, urbane Frenchman.

How he conducts the Brexit negotiations, and the deal he delivers, will matter more to Ireland than anything since we joined the EEC in 1972. Barnier’s mentality, how he approaches the talks, what he wants and his chances of getting it are of paramount importance to this country. So who is Michel Barnier?

The chief Brexit negotiator for the European Commission flew into Ireland on Wednesday to attend a conference of the European People’s Party, the European Parliament group that includes most of the continent’s big Christian Democratic parties, including Fine Gael. It’s his second visit to Ireland since his appointment, and he has consistently stressed the priority that Ireland’s issues – the Border, the economic relationship with the UK, the Common Travel Area and the peace process – will be accorded in the opening phase of the talks.

But Barnier works for Jean-Claude Juncker, the commission’s combative president and a man rapidly attaining the status of public enemy No 1 in the (slightly deranged) minds of the British Eurosceptic press.

Juncker is answerable to the European Council, the group of the heads of the European Union governments. And they in turn work for their parliaments and their voters. Irish officials and diplomats say he has a feel for Ireland, having served as both agriculture and regional affairs commissioner and having worked to secure peace funding for the North; they were not displeased about his appointment.

“He prides himself on a deep understanding of Ireland,” says one Brussels source, and Government sources in Dublin say he is sympathetic to them. But Barnier is a man with many masters. He surely cannot please them all.

“He’s very close to Juncker, very loyal to him and to Martin Selmayr,” says one European Commission source, referring to the powerful chief of staff in the commission president’s cabinet. “He will follow the guidelines from the 13th floor very closely.”

He is, say people in Brussels, more politician than bureaucrat. Despite his somewhat aloof image, sources say that he is a deal-maker and pragmatist.

“He’s very smooth, a good diplomatic operator. But he has good political skills. He’s quite correct, but I always found him pretty genuine,” says someone who has worked with – and occasionally against – him over the years.

“You could place your trust in him and you wouldn’t find it betrayed.”

“He’s not as brilliant or fluent as the stereotypical énarque [graduate of the elite École Nationale d’Administration] French minister,” says one Irish official who worked closely with Barnier during the Irish EU presidency in 2013, when he was the EU’s internal market commissioner. Although not an énarque – unlike many, perhaps even most, senior French politicians and bureaucrats – “Barnier is solid, professional, serious, and I would say pretty straight. He’s an experienced and quite pragmatic politician.”

For all that Barnier appears to fulfil every British Brexiteer’s expectations of a smooth-talking EU bureaucrat, sprung from the Paris political establishment to advance France’s interests through the EU (predictably, the UK press has dubbed him “the most dangerous man in Europe”), the truth is a bit different.

French politicians often cultivate a sort of mythical attachment to the countryside, the real France, la France profonde. But Barnier doesn’t have to – he is a real montagnard, a mountain-dweller, raised in the Alpine highlands of the Savoie.

He represented the region in the national assembly, for what is now the centre-right UMP party, from 1978 to 1995, and spearheaded the successful bid to host the Winter Olympics of 1992 in the alpine town of Albertville. “He bores everyone about how he got the Olympics,” says one Brussels veteran.

But it showed his ability to get things done, and his ascent through the ranks of government was subsequently swift; he served as minister for the environment, minister for European affairs, minister for foreign affairs and minister for agriculture. He also had a stint at the European Commission.

His biggest setback was when he lost the 2005 referendum on a constitution for Europe. But it was temporary, and after a year as an MEP, he again became France’s European commissioner in 2010, replacing Charlie McCreevy in the powerful internal market department.

Barnier was responsible for the regulation of financial services, just as the fallout from the financial crisis was at its height. He introduced more than 40 laws toughening up financial regulation, bringing him into conflict with the City of London, which was especially exercised by a proposal to cap bank bonuses.

UK press reports excoriated him as a vain, preening, interfering Brussels bureaucrat. But for all the abuse from Fleet Street, Brussels insiders say he is something of an Anglophile. Politically and personally, he will want to keep the UK as close to the EU as possible and that encourages Irish officials.

Reports in Brussels say Barnier delights in pointing out details that demonstrate how difficult it will be to disentangle the UK from the EU.

At one point Barnier noted that Britain would remain financially liable for decades for satellites launched into space while it was a member of the EU. He has also pointed out that not alone do millions of Britons travel to the EU every year, so do 250,000 cats and dogs.

Sources who have dealt with him generally note two pre-eminent qualities: political skill and determination. Mountain men tend to be tenacious.

“We montagnards always move forward,” he says. “We never retreat.”