Coalition will be ‘beginning of the end for Fianna Fáil’, O Cuív warns party members 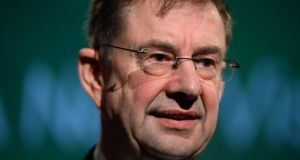 Deputy Eamon Ó Cuív told Fianna Fáil members the coalition would end up creating a political system with two large parties, but Fianna Fáil would not be one of them. File photograph: Cyril Byrne/ The Irish Times

Fianna Fáil TD Eamon O Cuív has written to party members warning them that accepting the coalition deal with Fine Gael and the Green Party will be “the beginning of the end” for Fianna Fáil.

“It is my regret,” Mr O Cuív warns, “if we enter this coalition, we will hasten the demise of our party and once again create a political system with two large parties, but that Fianna Fáil will not be one of them”.

He also says that the party’s recent poll rating of 14 per cent (in this week’s Irish Times/Ipsos MRBI opinion poll) “will only get worse” if it joins the proposed three-party coalition.

Mr O Cuív says there are alternatives to the coalition, but they have not been explored by the party leadership. Instead, he says, “the Irish people are being presented with an artificially diluted ‘take it or leave it’ choice between this coalition, another election or a ‘constitutional crisis’”. But he says it is clear that the “Irish electorate have firmly rejected returning Fine Gael to government. Yet this now is precisely what the Fianna Fáil membership is being asked to do.

Mr O Cuív has been a long-time opponent of party leader Micheál Martin, and favours a coalition with Sinn Féin.