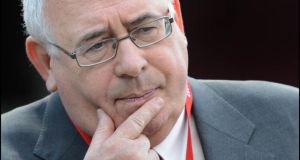 Labour TD Joe Costello: “In the past, Ireland has been to the forefront in leading EU thinking on the Middle East.” Photograph: Brenda Fitzsimons

The Government has been criticised by some of its own TDs for its decision to abstain in a United Nations vote calling for a commission of investigation to be set up into allegations of Israeli war crimes in Gaza.

In addition the two main opposition parties in the Dáil have sought the Dáil to be recalled during the summer recess to debate the ongoing conflict in Gaza where the number of dead has now exceeded 800 in two weeks, the majority of whom are civilians.

A number of prominent Labour Party TDs including former minister of State for foreign affairs Joe Costello and Clare TD Michael McNamara have said they oppose the position adopted by Ireland in Geneva this week, in its role as a member of the UN Human Rights Council.

Mr Costello said the abstention was “most disappointing” and said Ireland’s stance reflected the view of the European Union that the motion was unbalanced and inaccurate.

Signalling his strong opposition to this conclusion, Mr Costello said: “In the past, Ireland has been to the forefront in leading EU thinking on the Middle East and took the initiative in November 2012, persuading many EU countries to support recognition of Palestine as a non-member state with observer status at the United Nations.

“With the entire EU abstaining on the proposal for a commission of inquiry on grounds of imbalance and bias, it augurs badly for the outcome of that commission’s deliberations,” he said.

Mr McNamara also expressed his concern in a letter to Minister for Foreign Affairs Charlie Flanagan asking why Ireland campaigned so hard to become a member of the Human Rights Council if it was going to abstain on such a vote?

However, Labour leader and Tánaiste Joan Burton supported the position of Ireland at the council meeting but also said she totally condemned the “killing of hundreds of civilians in military attacks by Israel on targets in Gaza which fail to respect the legal requirement for any military action to be proportionate and discriminate. Equally, I condemn the firing of missiles from Gaza into Israel by Hamas and other militant groups.”

The Government has said the vote did not signal any change in Government policy on the Middle East and was consistent with its stance.

Mr Flanagan yesterday met with the Israeli ambassador to Ireland and said he expressed the disquiet and the grave concerns of the Irish Government and people at the escalation of violence in Gaza and at the atrocity which saw an UN-run school hit and at least 15 civilians and more than 200 wounded, including many children. “Such attacks on civilian institutions such as schools and hospitals are utterly unacceptable, contrary to international law and must stop immediately.

“I again reiterated to the ambassador that the appalling level of civilian casualties which we are now seeing in Gaza as a result of Israel’s current military operation cannot be justified under any circumstances,” added Mr Flanagan.

Both Fianna Fáil and Sinn Féin have submitted written requests for the Dáil to be recalled. Fianna Fáil foreign affairs spokesman Seán Ó Fearghail yesterday wrote to the Government chief whip requesting an urgent recall of the Dáil under standing order 24 to debate both the Gaza and Ukrainian crises. Sinn Féin leader Gerry Adams wrote to the Taoiseach also requesting a recall.