Ahern says Stormont agreement could be possible by end of May 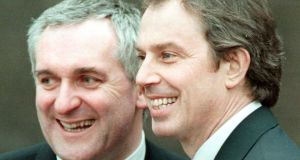 Bertie Ahern and Tony Blair after agreeing the peace deal for the North in 1998. Photograph: PA

Former taoiseach Bertie Ahern believes the institutions established by the Belfast Agreement can be restored by the end of May if the Irish and British governments are willing to do the hard work required to bring the Northern parties together.

Mr Ahern, who was one of the architects of the agreement signed 20 years ago, thinks the current problems dividing the parties are relatively minor compared to the problems that confronted him and then British prime minister Tony Blair in 1998.

“When you think back to the issues we had to agree on like the release of prisoners, decommissioning and the reform of the police, never mind the shape of new political institutions, the current problems don’t appear unsolvable.

“If the two governments at top level give it total commitment I believe a deal can be done quickly. I don’t see any reason why it can’t be done between now and the end of May if the will is there,” he said in an interview with The Irish Times.

Mr Ahern declined to be drawn into criticism of the two governments or the political parties, saying the fact that most of the main actors are fairly new to their jobs may have a lot to do with the current impasse.

“Theresa May hasn’t been prime minister all that long, and the same applies to Leo Varadkar in the Taoiseach’s office. The Northern Secretary [Karen Bradley] has just arrived, and the two top Sinn Féin people, Mary Lou McDonald and Michelle O’Neill, have been installed recently, and Arlene Foster has not been [DUP] leader for very long either.

“That is why Leo Varadkar and Theresa May have to get stuck in and work very hard to bring it all together. I know they have other big issues to deal with, notably Brexit, but that is not an excuse for not devoting all the time and energy required to the North.”

He pointed out that at the time of the Belfast Agreement Mr Blair had to deal with a range of problems, including Kosovo and devolution for Scotland and Wales.

He recalled that the negotiations leading to the Belfast Agreement continued for 25 hours non-stop. The critical meeting to get Sinn Féin on board took place between 4am and 8am on the morning of Good Friday, 1998. Only four people were involved in that crunch meeting: Mr Ahern, Mr Blair, and Sinn Féin’s Gerry Adams and Martin McGuinness.

“Before that between 10pm the previous night and 2am we had sorted out the ‘strand one’ issues with Seamus Mallon and John Hume [of the SDLP], so everything was still in the balance until that Good Friday morning,” said Mr Ahern.

His return to the talks on the Wednesday evening immediately after his mother’s funeral in Dublin was one of the key moments in the process as it indicated his total commitment to getting a deal.

Mr Ahern does not accept the contention of former first minister David Trimble of the UUP that loyalist violence could resume in response to the Irish Government’s focus on the Brexit Border issue. He pointed to the statement issued on Monday by the former loyalist paramilitaries committing themselves to upholding the Belfast Agreement.

“One of the things that needs to be done is to get all of the parties big and small involved in the talks, and not just the DUP and Sinn Féin. One of the things we did in 1998 was to lower the threshold to allow the smaller loyalist parties, the Women’s Coalition and others to get involved. That made a big difference in the end.In the next phase the SDLP, the Ulster Unionists, the Alliance and the smaller parties should have a role to play.”

Mr Ahern says that as well as being prepared to do the necessary hard work leading politicians from Dublin and London needed to be prepared to put up with a level of abuse from the various factions in the North that often sounds far worse than is really intended.

He is strongly of the view that the legacy of the violence needs to be addressed.

“I floated the idea of a truth and reconciliation commission in 1998 or 1999, after talking to Cyril Ramaphosa [of the African National Congress], but nobody here was interested at the time.

“It needs to be addressed now if only to alleviate the ongoing suffering of so many families. There was something like 40,000 incidents during the Troubles. When you think about it that means a lot of people were affected. The British government needs to provide the funding for the work to really progress.”

He suggests that one of the benefits to both the Republic and the UK of a deal in the North would be that it would allow the Anglo-Irish Intergovernmental Conference to start working again.

“The regular meetings at EU level between the Taoiseach and the British prime minister, and between senior officials and Ministers from both sides, was very important role in helping the two countries put their relationship on a sound footing. With the British out of the EU all that will be gone, but the intergovernmental conference gives us a framework for continuing good relations.”

He suggested that if the Taoiseach and prime minister met up to four times a year and the same applied to senior Ministers and officials there would be a framework for continuing good relations between the two countries and a mechanism to deal with the fallout from Brexit.