Three doctors will need to agree before termination granted on suicide grounds, with three further doctors involved on appeal 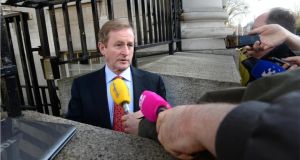 The Government last night agreed the wording for proposed abortion legislation to give effect to the X-Case ruling following a marathon meeting of Cabinet to resolve differences between Fine Gael and Labour over the contentious issue of suicide.

After some six hours of intensive negotiations, Ministers agreed to publish the Heads of the Bill for the Protection of Life During Pregnancy. The name of the legislation was changed from the previously titled Protection of Maternal Life Bill.

The compromise Bill is detailed and complex and includes a test for suicide risk which one Minister described as strict and robust.

The proposed solution is that the assessment will involve a panel of three doctors, two psychiatrists and one obstetrician, who must agree unanimously. There is provision for an appeal stage but it will only be triggered if a woman is refused a termination. That will involve a review by a further three doctors, who must also agree unanimously. This situation also reflects the recommendations of the expert group, chaired by Mr Justice Sean Ryan, which published its findings in November.

Fine Gael sources pointed out that six doctors will be involved in the process which they said was close to its negotiating position. Its Ministers also insisted that the law would not permit the establishment of any stand-alone clinic or facility providing any abortion service outside the public or voluntary hospital scenario.

These safeguards have been included to allay growing tensions within its parliamentary party. A number of Fine Gael TDs have publicly signalled their disquiet at any law that includes a provision that will be make abortoin legally permissible on the basis of a suicide threat. Brian Walsh, a TD for Galway West, has already stated he will not support the legislation.

For its part, Labour sources last night described the compromise as a “practical and workable solution” and said they were pleased with the result. It was pointed out that the second panel of three doctors would only be constituted in the event of a woman making an appeal against a refusal. This, said the source, was to the benefit of a distressed woman with suicidal ideation and fell far short of the 12 doctors proposed by Fine Gael in earlier drafts.

It had been expected that the Cabinet would sign off on the Heads of the Bill at its weekly meeting yesterday morning. This followed intensive discussions between both parties over the weekend and Monday, with growing confidence it would be signed off.

However, while Taoiseach Enda Kenny dismissed any suggestion of difficulties between the parties, the meeting continued far past its scheduled time and had to be adjourned at 2pm when no resolution had been reached. The meeting reconvened shortly before 6pm with a further two hours of very involved discussions, with the breakthrough announced just after 8pm.

According to Ministerial sources, there were very involved, and at times tense, discussions centred around the provisions for the suicide threat. Fine Gael Ministers argued that the clause in relation to suicidality would have to be very narrowly defined and circumscribed in order to assure a large number of Fine Gael parliamentary party members – easily over 20 TDs and Senators – who have been very uncomfortable with any concession in that area. Each of the Ministers spoke and, according to those with knowledge of the meeting, there was a lot of consultation with Attorney General Maire Whelan about what scenarious were allowable and not allowable under the law as set out by the Supreme Court in the 1992 X Case.

What was most crucial, according to a Fine Gael source, was that the test for a permissible abortion on the suicide ground had to be much stricter than that for a physical medical emergency, or a potentially fatal disease such as a heart condition or cancer.

The high level source said that language of the test suggested that abortion would only be allowable in extremis.

“The test is where termination was the only way in which the risk of self-destruction could be eliminated,” said the source adding that a robust debate on the legislation would now take place.

Notwithstanding Fine Gael Ministers expressing satisfaction that they have circumscribed the legislation some of the party’s TDs and Senators will be reluctant to support it .

The Oireachtas Committee on Health chaired by Fine Gael’s Jerry Buttimer is expected to open its hearings on the draft legislation tomorrow. Mr Kenny and Minister for Health James Reilly have promised that the legislation will be enacted before the Summer recess.

1 The real Contagion virus is out there and it’s causing virologists to worry
2 First full moon on Halloween night since 1955 will be rare ‘blue moon’
3 US election: ‘Trump would not be caught dead here unless he wanted our votes’
4 Man found guilty of murdering girlfriend during drinking session
5 Five nursing homes receiving ‘intensive’ State support as they battle serious coronavirus outbreaks
Real news has value SUBSCRIBE