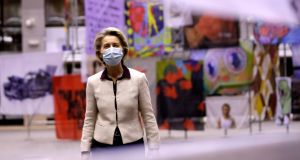 A deepening row over European plans to place export controls on vaccines being sent to the UK led to a major political backlash on both sides of the Border on Friday, as the bloc’s latest move drew criticism from Taoiseach Micheál Martin and First Minister Arlene Foster.

Earlier on Friday, Brussels announced plans to use part of the Northern Ireland Brexit protocol to prevent a “backdoor” on its plan to limit shipments of AstraZeneca’s Covid-19 vaccine to Britain. The pharmaceutical company is locked in a bitter row with Europe over a vaccine supply shortfall.

The European Commission planned to use article 16 of the protocol, which allows for special safeguard measures to be taken by either the UK or EU in exceptional circumstances, to prevent the movement of vaccines through Northern Ireland and onwards into the rest of the UK, while preserving the capacity to allow shipments into the North.

Ms Foster, the DUP leader, called the use of article 16 “an incredible act of hostility”. Mr Martin also raised concerns directly with commission president Ursula von der Leyen over the use of the highly politically sensitive article. A Government source described deep unhappiness in Dublin, saying the move was “completely unnecessary” with the potential for “explosive political implications”.

On Friday night, an EU statement confirmed the bloc was reversing its plan to invoke the article.

Ms Foster said the move to activate article 16 showed the bloc is “prepared to use Northern Ireland when it suits their interests but in the most despicable manner – over the provision of a vaccine which is designed to save lives”. Sinn Féin leader Mary Lou McDonald called the use of article 16 “a grave error”, while SDLP leader Colum Eastwood said it was “disproportionate” and a “grave error of judgment”.

The fierce reaction triggered intense discussions within the commission late on Friday night, as the original version of the regulation in question was removed from the internet and a source indicated a new version would be released within hours.

It came as the commission cleared the way for the rollout of AstraZeneca’s so-called game-changer vaccine in a boost for Ireland’s immunisation programme, which remains beset by concerns over the supply of doses.

Almost exactly a year after the coronavirus outbreak was declared an emergency by the World Health Organisation, the commission followed the recommendation of the European Medicines Agency (EMA) on Friday night and approved use of the AstraZeneca vaccine in over-18s. This was despite concerns in some European countries over administering the vaccine – which is easier than some others to store and distribute – to older people, due to a smaller representation of over-55s in trials.

The National Immunisation Advisory Council, responsible for giving advice on how to use the vaccine in Ireland, will meet over the weekend to review the data and EMA recommendations, with advice expected in the Department of Health early next week. Minister for Health Stephen Donnelly said he would not comment on the work of the independent group. “As with any advice, we will look at it, consider it [and] take it very seriously,” he told The Irish Times.

Notwithstanding the approval, and positive results from trials on Johnson & Johnson’s single-shot vaccine, deep concerns remained over supplies into Ireland of Covid-19 vaccines.

US drugmaker Moderna’s vaccine – which plays a smaller role in Ireland’s programme – became the latest to fall victim to anticipated shortfalls in deliveries, with several European countries told to expect lower volumes next month. The Health Service Executive said on Friday while there was no reduction anticipated in Ireland’s consignment of 6,000 doses expected next week, it did expect a reduction in February. “We remain engaged with the manufacturer to understand the scale of these reductions,” a spokeswoman said.