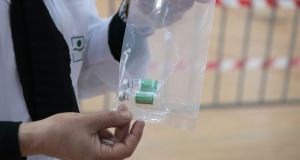 A health worker prepares to inject a first dose of a Oxford-AstraZeneca Covid-19 vaccine shot at a vaccination centre. Photograph: EPA

The EU on Friday abruptly reversed course on a plan to use emergency Brexit measures to put restrictions on exports of Covid-19 vaccines moving from the bloc across the Irish Border into Northern Ireland, after the planned move sent shockwaves through the North, London and Dublin.

In a steep escalation of the EU’s fight to secure vaccine supplies, Brussels had said it would trigger clauses in the Northern Irish Protocol in the EU-UK withdrawal agreement to control shots moving across the open Border between the State and the North. It said this plan aimed to prevent the movement of vaccines onwards into the rest of the UK via a Northern Ireland “backdoor”, while preserving the capacity to allow shipments into the North.

Following an outcry in London, Belfast and Dublin, the EU published a statement just before midnight saying it would ensure that the Northern Ireland Protocol, designed to keep the Border open, would not in fact be affected by its moves to control Covid-19 vaccine exports.

It warned, however, that should vaccines and active substances move toward third countries and out of the bloc, it would use “all the instruments at its disposal”.

The European Commission is to redraft planned measures to control vaccine exports following the uproar.

As part of its plans in this regard it had moved to activate Article 16 of the Northern Ireland Protocol that allows parts of the special arrangement allowing free movement of products from the EU to Northern Ireland to be suspended.

It is understood the European Commission will now publish a new version of its vaccine export control regulations in the morning.

Taoiseach Micheál Martin welcomed the decision to no longer activate Article 16, tweeting that “this is a positive development given the many challenges we face in tackling Covid-19”.

Minister for Foreign Affairs Simon Coveney tweeted in response to the EU’s statement: “Welcome news, but lessons should be learned; the Protocol is not something to be tampered with lightly, it’s an essential, hard won compromise, protecting peace & trade for many.”

The move comes amid a deepening row over the allocation of the Oxford/AstraZeneca Covid-19 vaccine after AstraZeneca announced delays to its EU operations that would affect the supply of vaccines to the bloc.

The Taoiseach spoke directly to European Commission president Ursula von der Leyen on the issue of the plan to activate Article 16.

A Government source described deep unhappiness in Government Buildings over the EU’s planned move, describing it as “completely unnecessary” with the potential for “explosive political implications”.

EU Com statement tonight confirming NI Protocol Art 16, safeguard clause, will not be triggered.
Welcome news, but lessons should be learned; the Protocol is not something to be tampered with lightly, it’s an essential, hard won compromise, protecting peace & trade for many. pic.twitter.com/QLKpfhR9Yt

This is a positive development given the many challenges we face in tackling COVID-19.

The Taoiseach also spoke with British prime minister Boris Johnson amid the row.

A No 10 spokesman said: “The PM stressed the UK’s enduring commitment to the Belfast/Good Friday Agreement and said the EU must urgently clarify its intentions and what steps it plans to take to ensure its own commitments with regards to Northern Ireland are fully honoured.”

Ms Foster also spoke with Mr Johnson and UK cabinet office minister Michael Gove about the issue and called for a “robust response” from Downing Street.

Article 16, which allows for special safeguard measures to be taken by either the EU or UK in exceptional circumstances, has been the focus of demands for the protocol to be suspended by those who oppose it.

Under the terms of the protocol, goods should be able to move freely between the EU and Northern Ireland as the region remains in the single market for goods and still operates under EU customs rules.

The new EU measure would have meant Northern Ireland would be considered an export territory for the purposes of vaccines sent from the EU, including the Republic of Ireland.

Northern Ireland’s vaccines arrive from the rest of the UK at present, so those would have been unaffected.

Ms Foster said: “By triggering Article 16 in this manner, the European Union has once again shown it is prepared to use Northern Ireland when it suits their interests but in the most despicable manner – over the provision of a vaccine which is designed to save lives.

“At the first opportunity, the EU has placed a hard border between Northern Ireland and the Republic of Ireland over the supply chain of the coronavirus vaccine.”

The DUP leader added: “With the European Union using Article 16 in such an aggressive and most shameful way, it is now time for our government to step up.

“I will be urging the prime minister to act and use robust measures including Article 16 to advance the interests of Northern Ireland and the rest of the United Kingdom.”

Sinn Féin leader Mary Lou McDonald tweeted: “The use of Article 16 is a grave error. Our citizens need timely access to lifesaving vaccines not trade disputes. Now is a time for cool heads and solidarity.”

Northern Ireland’s Deputy First Minister, Sinn Féin vice-president Michelle O’Neill, said she had spoken to the Government in Dublin about the issue. “I have just spoken with the Irish Govt to raise my very serious concerns in relation to the invoking of Art. 16,” she tweeted. “This is a totally ill judged move by the EU and should not have been triggered.”

SDLP leader Colum Eastwood said the move undermines progress made to defend the interests of the island.

“The disproportionate decision to invoke Article 16 of the [Northern] Ireland Protocol by the European Commission is a grave error in judgment that undermines the work that has taken place over the last five years to defend the interests of people on this island.

“We face a common threat. Our response to this virus, and to the supply of vaccines, should be characterised by our common values.”

UUP leader Steve Aiken said Northern Ireland Secretary Brandon Lewis should be embarrassed. “The EU is unilaterally invoking Article 16 to protect its own interests and it’s about time the UK government did the same instead of being lead actors in a ridiculous charade that there is no border in the Irish Sea and that Article 16 can’t be invoked.”

“This afternoon’s invocation of Article 16 of the protocol to inhibit exports of Covid vaccines from the EU to Northern Ireland is the most telling illustration imaginable that for the EU the protocol is a plaything to be exploited when it suits its selfish interests.

“The idea that the EU cares anything for Northern Ireland or its people is exposed as utterly bogus.” – Additional reporting: Reuters/PA