Speaking on the BBC's Andrew Marr Show, Britain's Brexit minister David Davis has said that the British government wants to "protect Ireland from the impact of Brexit." Video: BBC 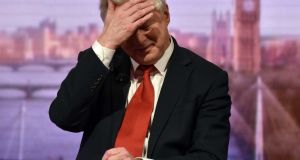 EU Brexit negotiators have expressed doubts about the feasibility of the UK’s pledge to avoid a hard Border in Ireland after Brexit.

In a briefing prepared for European leaders ahead of the EU summit in Brussels this week, European Commission officials say the UK’s determination to leave the single market and the customs union “seems hard to reconcile” with its promise to avoid a hard Border in Ireland.

The commission paper, which has been seen by The Irish Times, says the EU will have to ensure future proposals by the British on the Border do not affect “Ireland’s place in the internal market and consequently the integrity of the internal market.”

Mr Davis was reacting to fears about the deal from pro-Brexiteers who believe that it signals a move towards a soft Brexit by British prime minister Theresa May’s government.

In Dublin, the Government reacted with a statement saying Ireland and the EU will hold the British government to the agreement made last week.

The Government statement pointed to article 46 of the agreement made on Friday which states that: “The commitments and principles . . . are made and must be upheld in all circumstances, irrespective of the nature of any future agreement between the European Union and the United Kingdom. ”

A Government source said that because it assumed the British government would honour its word, it expected the commitments on the Border to be implemented.

Sunday’s exchanges come ahead of a summit of EU leaders in Brussels this Thursday and Friday which is expected to formally approve the decision that “sufficient progress” has been made in the Brexit talks to move to phase two of the negotiations.

These talks, which will begin in the new year, will focus on the future relationship between the EU and the UK, including the transition period and the outline of a possible future trade deal.

According to one senior source with knowledge of their contents, the conclusions are unlikely to present any difficulties for national leaders.

The commission paper explains why the commission team recommends the summit should acknowledge “sufficient progress”. It also explains that, in the absence of an EU-UK deal, the commission will make sure that EU laws are upheld in any arrangement between Ireland the UK on the Border. “Implementation and oversight mechanisms,” it says, “will be established to safeguard the integrity of the internal market.”

The task force also warns that many of the commitments entered into by the UK on the Border now “will need to be translated into workable, practical solutions in the second phase of the negotiations”. It says this work needs to be continued “in a distinct strand of negotiations”.

“The commission considers this issue to be of utmost importance,” it says.

The report also records a pledge by the commission to include in its next budget provision for its continued commitment to cross-Border funding programmes, notably the Peace and Interreg programmes.

Ms May will tell MPs on Monday the deal she reached with European Commission president Jean-Claude Juncker has introduced a new optimism to the Brexit talks.