Independent Alliance calls on Taoiseach and Martin to swallow pride 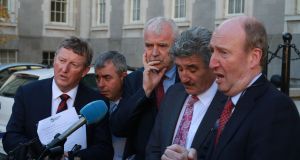 The Independent Alliance has called on Taoiseach Leo Varadkar and Fianna Fáil leader Micheál Martin to swallow their pride and bring the country back from the brink of a general election.

The group, which is part of the Coalition Government with Fine Gael, insisted it has full confidence in Tánaiste Frances Fitzgerald but accepts she has displayed poor communication.

Minister for Transport Shane Ross said she made a number of mistakes but it would be “utterly disproportionate” to bring the country to an election over an email.

It was time for talks with two “very grown-up men who are now in a very difficult position”, Mr Ross added.

“They must get together behind closed doors and make a mature decision, that the Government and the arrangement will continue.”

The group meets the Taoiseach at 7pm on Friday to stress its concerns.

The five TDs denied this was about them retaining their position in Government and about the country, who they say does not want a general election.

Sean Canney TD said it was time to think rationally and to “come out of the bubble”. He insisted it would be unwise to collapse the Government in the midst of a housing crisis and with the difficulties in the health crisis.

Minister of State John Halligan also advised the work of the Oireachtas committee on the Eighth Amendment would fall if an election was called.