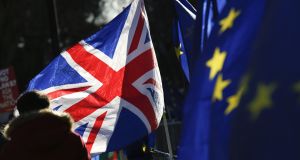 In a sign that the talks are entering their final stage, four officials from the European Commission’s communications team joined the negotiators in London. Photograph: Bloomberg

were paused last night after the chief negotiators – Michel Barnier and David Frost – said “significant divergences” on key issues meant the conditions for an agreement were not met. However, they made it clear that a deal remains in prospect.

The negotiators have now escalated the talks to their political principals, European Commission president Ursula von der Leyen and British prime minister Boris Johnson, as it is believed that the remaining gaps in the talks can only be bridged with high-level political intervention.

Mr Johnson will speak to Ms Von der Leyen today and he is also likely to call other European leaders, including French president Emmanuel Macron.

Downing Street had earlier warned that the negotiations had reached a “very difficult point”.

Negotiators are now working towards a deadline on Monday, when Mr Johnson has promised to restore to the Internal Market Bill clauses that would breach the Brexit withdrawal agreement.

“These are live negotiations which are ongoing. There are still some issues to overcome. Time is in very short supply, and we’re at a very difficult point in the talks,” a spokesman for the prime minister said.

“What is certain is that we will not be able to agree a deal that doesn’t represent our fundamental principles on sovereignty and taking back control. That includes controlling our borders, deciding on a robust and principled subsidy control system, and controlling our fishing waters.”

In a sign that the talks are entering their final stage, four officials from the European Commission’s communications team joined the negotiators in London.

However, Clément Beaune, France’s European affairs minister, warned that if his country was unhappy with a deal negotiated by Mr Barnier it would veto it.

“I think it’s also the case for our partners that if there were a deal that isn’t good, which in our evaluation doesn’t correspond to those interests, we will oppose it,” he said.

“Yes, each country has a veto, so it’s possible. France, like all its partners, has the means of a veto. We must make our own evaluation, of course, of this deal; that’s normal. We owe that to the French people, we owe it to our fishermen, and to other economic sectors. I want to believe we will have a good deal, but to get a good deal you know it’s better to be frank and to say our interests. We have been very clear – sometimes the Brits a little less so – about our interests.”

Most of the legal text of an agreement running to hundreds of pages has already been agreed, but differences remain over fisheries, level playing field guarantees of fair competition and how the deal should be enforced.

The issue of dispute resolution and enforcement has become more central since Mr Johnson threatened to break international law with the Internal Market Bill.

The issue of fisheries is politically potent in Britain and a number of EU states, notably France, and Mr Beaune said his government would not accept a deal that was bad for French fishermen, adding that the risk of no deal was real.

“We mustn’t hide it because there are businesses, our fishermen, citizens who need to know, and so we must prepare for a risk of no deal. That’s to say on December 31st there will be no more free circulation and free access to the UK market and vice versa,” he said.

“But it’s not what we want, and the negotiations are still going on with Michel Barnier, who is in London at the moment.

“I still hope we can have a deal, but I also say to our fishermen, to our producers, to our citizens, that we won’t accept a bad deal.”