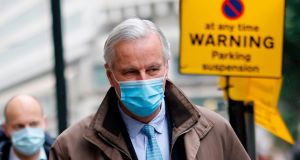 EU chief negotiator Michel Barnier walks to a conference centre in central London as talks continue on a trade deal between the EU and the UK. Photograph: Tolga Akmen / AFP

Brexit has long had an almost unique ability to unite the European Union. But tensions arose both between member states, and between national governments and the negotiating team charged with arguing for their interests this week.

France and the Netherlands warned a deal should not be signed at any price. They see no deal as terrible but temporary, whereas a bad deal could have an impact for decades.

Fish is the big issue for France, and a pressure point for President Emmanuel Macron as he looks towards a re-election campaign against the eurosceptic Marine Le Pen.

He feels righteous in his cause: continental fishermen were drawing their catch in the seas around Britain long before it joined the European Union, and indeed long before those waters were deemed British. The United Kingdom’s exclusive economic zone in the seas was only established in the last decade.

For the Netherlands, the worry is industry, and the so-called level playing field. If British businesses are more loosely regulated and can make things cheaper than Dutch companies, while selling their products just as easily to the EU’s 450 million consumers, that is seen by the Hague as creating permanent disadvantages for the economy.

Amid the rising anxiety, EU capitals summoned their chief negotiator Michel Barnier to update them on the state of the talks. Paris and the Hague warned him not to exceed his negotiating mandate, with Barnier suggesting that, if a deal was to be found, he might have to.

Ireland, meanwhile, is playing peacemaker, insisting to its EU counterparts that despite occasional appearances, the London government is sane and wants a deal, and that an agreement is there to be signed. This is partly driven by fear, due to emotional insight into what the consequences of no deal could be.

Some on the continent imagine no deal will teach London a lesson, and that Britain will be forced by economic necessity to return to the negotiating table, where it will find the EU waiting with the same demands as before.

Dublin fears that such an outcome could radicalise and estrange our friends across the water.

The comment most heard this week was that “the pressure is getting to people”. Perhaps that’s understandable with another set of crunch negotiations under way to talk down Hungary and Poland from their blockade of the EU’s €1.85 trillion budget and recovery fund. If the impasse cannot be broken in time for January, EU funding of all kinds will abruptly reduce or stop all together.

This would cancel key wins for Ireland agreed this summer: the €5 billion Brexit adjustment reserve to compensate for the damage of Brexit, and the Peace Plus programme for cross-border funding for the next seven years. It’s been somewhat overshadowed by the Brexit brinkmanship, but the risks to Ireland are just as real.