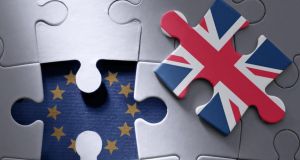 The three sides to the Brexit process – the British, the Irish and the EU – have all spoken of “flexible and imaginative solutions” to the problems the UK’s exit from the bloc poses for both sides of the Border.

Here you will find the nuts and bolts of the preparations for the British exit from the EU, and people involved say that the process is enormous, complex and, as yet, deeply uncertain.

The scope of the project of separating the UK from the EU is vast, as has become clear to the people who have delved into the detail during the process. But for Ireland one issue looms larger than any other: the future of the Border.

Both sides in the negotiations that finally began on Monday in Brussels agree that the UK will leave the EU.

Both sides also say that the open Border in Ireland will be maintained as much as is possible.

The only way these two statements can be reconciled is by having a set of special arrangements for Northern Ireland and the Border area, governing movement of goods, trade and the practical issues which reflect the intertwining of the economies of the North and the Republic.

But what those arrangements might be depends hugely on the shape of the future relationship between the UK and the EU. For Ireland, that is where the game is.

Many of the Border troubles could be avoided if the UK stayed in the customs union. But the new British government has reiterated that this will not happen – despite the fact that the new Westminster arithmetic suggests there may not be a majority in the House of Commons for a hard Brexit. Even the chancellor of the exchequer, Philip Hammond, in many ways the standard-bearer for the soft Brexiteers in the British government, said earlier this week that the UK would be leaving the customs union, though he followed this by signalling that a long transition period would be necessary. The DUP’s Ian Paisley also said at the weekend that Northern Ireland would be leaving the customs union.

The Government has not completely given up on the chances of the UK staying in the customs union.

“If the UK stays in the customs union, that would solve all our problems,” says one senior official. “That doesn’t look very likely right now, but given the turbulence of British politics, you’d be foolish to rule that out.”

Nonetheless, the Government has accepted that it must plan for the eventuality of the British leaving the customs union. That would mean that the future trading relationship between the EU and the UK – and therefore between the UK and Ireland – would be up for negotiation.

Countries can be part of the customs union without being a member of the EU – Turkey is one, for example – but you must accept the “common external tariff” arrangement, whereby all goods entering the union are subject to the same arrangements, but then have free movement within it. A consequence of this is that it’s the EU which negotiates trade agreements with other countries on behalf of members of the customs union. But the UK wants the right to negotiate its own free-trade agreements with the rest of the world. If the British stick to that requirement, they’re out. And if they are out, a customs border of some description will be necessary in Ireland.

The Revenue Commissioners have been conducting a lot of behind-the-scenes research about how that might work, if it comes to it. Models of borders between other countries have been studied and technological solutions that would avoid the need for physical border checks examined.

Giving evidence at a recent Oireachtas committee, Liam Irwin of the Revenue Commissioners told TDs and Senators that most of the customs checks could be done electronically, though some goods travelling between Ireland and Britain would have to be physically checked.

Irwin said that after Brexit it was likely that the UK would be a “third country” and this meant “all trading transactions will be subject to customs declarations”.

Customs declarations would increase “tenfold”, he said. Other sources say that is a conservative estimate. And, Irwin said, there would have to be the facility for physical customs checks. These wouldn’t have to be at the Border, he said. But they would have to exist.

“Customs controls – yes. At the Border? Possibly not, but somewhere in proximity to the Border,” the Revenue official said.

But is there another way around this eventuality?

The three sides to this process – the British, the Irish and the EU – have all spoken of “flexible and imaginative solutions” to the problems Brexit poses for both sides of the Border.

Both the UK government and the DUP have ruled out a “special status” for the North; but “special arrangements” might be possible.

Irish officials have been working at those “flexible and imaginative solutions” for months now, but they remain a closely-guarded secret in advance of the negotiations.

Everyone is being coy – including Brussels. The EU’s chief negotiator, Michel Barnier, has repeatedly said Brussels has three priorities in the early stages of the task that must be addressed before they can move on: money, people and Ireland. The money bit is the divorce settlement that the UK must pay to cover its outstanding liabilities to the EU. The people bit is the question of the rights of EU citizens living in the UK and of UK citizens living in EU countries. Both of these subjects have been the subject of detailed pre-talks papers sent to the UK which outline the EU’s thinking and approach. But there has been no paper about Ireland.

The Government has made much, latterly, of its diplomatic campaign around Europe to promote Ireland’s special concerns about the impact of Brexit. Ministers frequently referenced the 400 meetings and contacts that took place since last autumn in advance of the triggering of article 50 and the setting of the EU’s negotiating priorities.

Politically, that focus has now shifted to paving the way for potential special arrangements that would require the agreement of other EU states.

Most senior sources are tight-lipped as to what these special arrangements might be. Partly that’s because they want to see what it is the UK envisages its future trade relations with the EU might look like; and partly because they don’t want to set out their stall in public ahead of what might be tough negotiations.

One senior figure says officials are doing some “quiet, below-radar exploration of options” of what a special Border deal might look like, but are waiting for more clarity from the UK side.

Several officials and politicians expressed frustration that it is still not clear what the UK is actually trying to achieve. “They keep saying, ‘We are leaving the customs union,’” says one senior source. “In the next breath they talk about some new or close customs arrangements.” His frustration is echoed all over Europe.

However, one senior official suggests the type of possibilities that are likely to feature. “Derogation from some EU laws? Special Irish protocols, especially in the area of agriculture? Could we ring-fence the island of Ireland as a single market for agriculture? It’s all hypothetical, but it’s the logical next step.”

If the UK presses forward with its departure from the customs union, then the Government is likely to push in this direction. However, all sources say it will be necessary to have a united Northern Executive, as well as the UK government, seeking the same thing.

If that happens, the next hurdle for Ireland will be to get the EU to agree to the bending or changing of many of its own laws. That will be a significant political and diplomatic undertaking, according to several people with knowledge of the landscape around Europe and Brussels.

Kathy Sheridan: Pandemic is reminder of poison in British and Irish politics
Nearly half of passengers arriving into Ireland were on holiday - Taoiseach

Nearly half of passengers arriving into Ireland were on holiday - Taoiseach 20:49
Pay dispute talks between Government and public health specialists to continue 20:37
Sharp increase in the number of Covid-19 family outbreaks 20:19
Varadkar says up to 100,000 vaccines a week expected from April 20:05
Jim Allister says NI protocol points towards push for united Ireland 19:35