Rights of more than 1.5 million east Europeans in UK a key issue 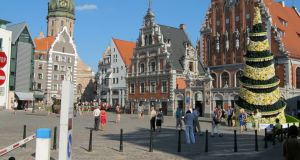 The old town in Latvia’s capital, Riga. From Bulgaria on the Black Sea to Estonia beside the Baltic, political leaders in eastern Europe are lobbying for a “soft” Brexit.

The European Union’s eastern members are lobbying for a “soft” Brexit that would preserve close ties between Britain and the bloc, and prevent a bitter divorce that could harm their economies and the rights of their many citizens in the UK.

From Bulgaria on the Black Sea to Estonia beside the Baltic, political leaders are encouraging the EU negotiating team to find an amicable resolution to the split and protect co-operation with the UK on everything from trade to security.

“We want a deal that is fair to both sides... and the status of EU nationals in the UK and UK nationals in the EU is very important to us, and it would be very sad if it became hostage to political games,” said Latvian foreign minister Edgars Rinkevics.

Speaking to The Irish Times in the Latvian capital, Riga, Rinkevics said there was “still a temptation to punish Britain in some quarters of the EU”, and signs of possible “naiveté” from the UK in imagining how good a deal it could get.

“Some seem to think they can live as they did in the EU, taking all the benefits but not doing what they don’t like – choosing op-outs – which is not the case.”

“We hope for a very pragmatic approach but the risks are increasing and, the more we get into the nitty-gritty, the more pessimism there is. The negotiations may change a lot, but Brexit is more complex and difficult than it seemed” when Britain voted to leave last year.

About 150,000 Latvians are thought to be living in Britain, and the Baltic state of less than two million people is one of the EU’s most dependent on remittances.

Latvia would suffer economically if a hard Brexit restricted the rights of EU workers in Britain, as would countries like Poland – which has about one million citizens living in the UK – and Romania and Lithuania with more than 200,000 each.

The EU’s poorer eastern members also fear the impact of losing the second-biggest net contributor to the EU budget, from which hundreds of billions of euros in funding have helped modernise infrastructure across the former communist bloc.

After Britain’s conservatives lost their majority in the recent election, Polish deputy prime minister Mateusz Morawiecki said he hoped the UK would adopt a more conciliatory approach to Brexit talks.

“If this leads to the possibility of a softer exit by Britain and a compromise model linked to Brexit, then I would be happy with that,” he said. “Who knows, perhaps British society will still decide it’s worth remaining after all in a Europe of nation states.”

Andrius Kubilius, a Lithuanian former prime minister and a member of its Brexit committee, thought the Tories’ lack of a clear mandate would make Brexit talks more complicated but possibly less confrontational.

“I think it will be much messier now and negotiations will be much more difficult (but) there will be a greater demand for a softer Brexit now and that is to be welcomed.”

The future of funding and the rights of its citizens in the UK are also Brexit priorities for Romania, which will hold the rotating presidency of the EU when Britain is due to leave in March 2019.

“Our bid is to have a post-Brexit accord with the UK that keeps them as close as possible to the European Union, ” Romanian foreign minister Teodor Melescanu said recently.

Several eastern European states have also urged the EU to ensure that Britain’s departure does not harm co-operation on security issues from intelligence-sharing to handling of international criminal cases and the tracking of suspects.

“Facing challenges like this one, terrorism, is always more efficient and more effective if we face those challenges together, united in a common framework,” Jan Kral, the Czech Republic’s acting state secretary for EU affairs, said after last month’s terror attack in Manchester.

“No matter what our differences of opinion may be on issues like access to the internal market and the financial settlement, security is one of the areas that cannot be used as a bargaining chip by either side.”

As multinational Nato battalions deploy to Estonia, Latvia, Lithuania and Poland to deter any potential threat from the Kremlin’s forces, those countries are also concerned about the departure from the EU of a significant military power and a strong advocate of sanctions against Russia over its aggression in Ukraine.

“In this country, we are very interested not only in future trade relations but also security relations,” Rinkevics said in Riga.

“We realise the only way to get a deal is as 27 [remaining members]. Right now, we are a remarkably united 27 -– and 28 when it comes to Russia policy. Is it going to hold? I hope so.”